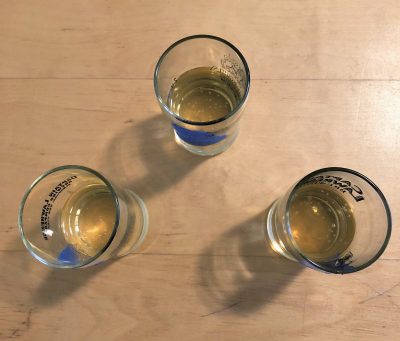 Triangle testing was used to see if I could consistently select the one beer out of three that was different.

A number of months ago I royally screwed up an experiment designed to test whether using low-dissolved oxygen brewing had any practical effect on the the outcome of a finished beer. I accidentally dosed the beer with 10x the amount of sodium metabisulfite intended and successfully produced two wholly undrinkable beers.

For those unfamiliar, the original reason I wanted to test this variable was a paper published on germanbrewing.net. The authors argued that the use of low-dissolved oxygen techniques on the hot side of the brewhouse is a primary driver of the fresh malt flavor present in German lagers and it is those techniques that are a key differentiator between said beers and those from other lager breweries that have less control over oxygen on the hot side of their brewhouse.

The paper provides an outline of techniques homebrewers can use to limit oxygen uptake on the hot side of the brewhouse. Based on those techniques, I derived an experiment where I would brew one lager using conventional techniques and then brew a second, identical batch that incorporated the following LODO techniques:

For the recipe, I chose to make a simple pale lager that had a touch of simple sugar in it as well as a touch of late hop character. The idea was to create a fairly neutral palate where any differences could be easily perceived.

To test the resulting beers, I completed a series of blind triangle tests. To setup the test, two of the same beers and one outlier were tasted blindly side-by-side. I then tried to select the sample of the three that was different. This test was completed five times with the outlier beer randomized over the tests. Pure chance would have had me select the correct sample 1/3 of the time or 1.65 times out of the 5 rounds of testing. With this particular round of testing, I was able to select the outlier successfully 3 of the 5 times.

First, I must say that it was extremely difficult to distinguish between the two beers in a blind triangle test. The differences between the beers were extremely nuanced. The biggest perceivable difference between the samples was that the LODO beer had a consistently higher level of sulfur in the aroma—making the beer stand out ever so slightly in a blind triangle test. I failed to notice any perceivable difference in either malt or hop character between the LODO and conventionally-brewed beers. If I were to judge the beers on a point system, I would say the LODO beer was subjectively slightly worse than the conventional beer due to the increased sulfur levels in the beer. This is likely directly attributable to the sodium metabisulfite used in the beer mash; something I wouldn’t expect to be employed by a commercial brewer attempting LODO hot side processes. This makes me think that perhaps the methods large German lager brewers use to prevent hot side aeration (that do not employ sodium metabisulfite) may very well be effective in maintaining a fresh malt character in their beers. As a homebrewer, I’d say the use of sodium metabisulfite as an oxygen scavenger should be cautioned against, at least at the 55 mG/L levels that seem to leave residual sulfur in the beer. 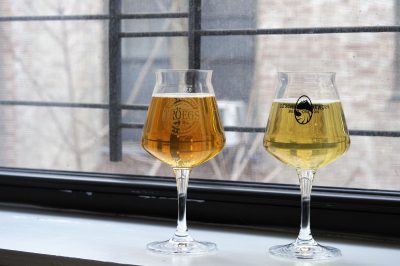