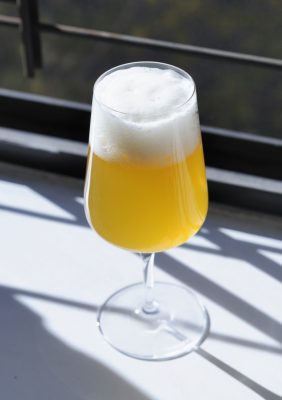 Several years ago the Homebrew Wife and I had a memorable beer from Danish brewer To Øl called “To Øl Gose to Hollywood”. The beer was very refreshing with a bright citrus character. The natural harmony between salt and citrus that is frequently exploited in the culinary world also makes for a fantastic flavor combination in beer.

Fast forward many months, and still inspired by the concept of citrus, salt, and lactic acid, I took a shot at producing a similar beer. I’ve brewed a number of beers in the past that featured orange peel on the hot side, but have always been somewhat underwhelmed by the amount of citrus character that carries over into the finished beer. For this iteration, I decided to try and boost the orange character with the addition of orange juice concentrate. The juice concentrate was added at the end of whirlpool to sanitize it and retain as many volatile aromatics as possible.

Aroma (5/12):
The beer presents a moderately lactic, yogurty twang on the nose with only hints of soft sweet orange. The malt is lightly bready, but otherwise very benign. In general, the aromatic presentation is quite flat. Would like to see the citrus really popping out of the glass.

Appearance (3/3):
Deep gold with an obvious, although not murky, haze. The beer has a great big white persistent head. Very attractive.

Flavor (8/20):
This beer has a medium-plus orange character that is very juice like. It’s hard to explain, but the beer’s character is less like the ‘essence’ of orange (oil/zest) and more like watered down orange juice (which it kind of is). The orange character is not as bright as I would have hoped, although the high lactic acidity does help to brighten the overall beer. The salt is noticeable—just above the threshold of where I’d be able to pull it out as a salinic note. There is a slight bready character coming from the malt that is perhaps just a touch high.

Mouthfeel (2/5):
The beer is pillowy with a slightly full mouthfeel. The wheat character is very evident, giving a fullness that is perhaps accentuated by the salt. The beer could be a bit crisper, although a medium-plus acidity helps keep the body in check. The carbonation is still a bit low, in spite of priming to 3 volumes of CO2. I get the sense that the beer is struggling to fully carbonate given the acidic environment.

Overall Impression (5/10):
While this is a pleasant beer, it needs some work before it’s on the same plane as the To Øl beer. I’ve had difficulty getting lactic heavy beers to attenuate to the levels that I desire. For the next iteration of this beer, I will employ a step mash with the intent of driving attenuation. Additionally, I’d consider dropping the orange peel on the hot side as I don’t think it is contributing much to the beer. The orange juice addition was an interesting experiment, but I don’t think it will be able to imbue the bright citrus character I hope to bring to this beer. The acidity in the beer is right where I’d like it. The salinity is good as well, although I may pull back 10-15% in an attempt to get it a bit less perceptible.

Bonus: See how judges scored this beer at the 2017 Queens Beer Challenge.