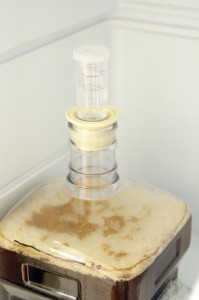 UPDATE 4/5/2014 – Beer placed 1st as a Vienna Lager in Category 3 European Amber Lagers at the 2014 First Round of the National Homebrew Competition (NYC Regional).

When it comes to brewing a particular style of beer, I am a serial philander. Rarely do I brew the same beer twice, and when I do it is typically with radical departures to the recipe. Of course, there are exceptions to this rule, and Vienna lager is one of them.

I’ve probably brewed four or five Vienna lagers since I began brewing in 2009. While most have been outstanding, and several have won pretty nice awards (Gold in the 2012 NHC first round, and 2nd Best of Show at the 2011 Best of the Bay), I seem to always be making tweaks to the recipe to correct minor details that I believe would lead to a better beer.

With this iteration, I’ve gone back to my favorite lager strain, White Labs WLP833 German Bock, which always seems to produce very malt-forward, diacetyl free lagers for me. Additionally, I’ve introduced a single step decoction into the recipe as a replacement for the touch of melanoiden malt that I generally throw into my non-decocted lagers. A small Hallertaurer addition with 10 minutes left in the boil gives the beer an almost imperceptible late hop character.

With winter coming, and the ground water cooling, it is the perfect time to brew lagers. My Blichmann Therminator plate chiller struggles with warm summer water, but drops the wort to pitching temperatures with ease during the cooler months. With a little extra time in my fermenation fridge, I am able to chill my wort to 44°F before pitching my yeast. Over the course of the lag phase, I let the temperature free rise to 48°F and then keep it there until the very end of fermentation when I complete a diacetyl rest. This requires a very large starter, but tends to create what I feel is a cleaner lager character.