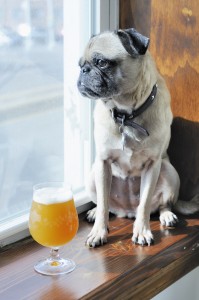 Single Tap is my constantly evolving attempt to brew what I consider to be the perfect IPA . I’ve now brewed iterations of this beer on four different occasions. The recipes have constantly evolved, converging towards a unified goal – making an extreme IPA where the process and recipe are tuned to produce the brightest and most intense hop aromatics possible. I question whether any beer, commercial or made at home, can ever be hoppy enough to satiate the most extreme hop heads. This is my attempt.

Let’s talk strategy. The more times that I’ve brewed this, the more I’ve realized that it would be difficult if not impossible to over-attenuate a beer like this. The drier I’ve pushed this beer, the more easily I’ve been able to get the hop aromatics to jump to the foreground. This beer went from 1.072 to 1.012 — 83% apparent attenuation, and could easily be pushed a bit further. Copious additions of simple sugar and low mash temps are key, and produce none of the oft-cited negative flavors that many brewers attribute to brewing with sugar. The grain bill derives a touch of malt complexity through the use of lightly kilned base malts (Vienna) and a token addition of low lovibond crystal. The malt character should be in the background and provide a clean backdrop for the hops.

Hopping levels in this beer are a bit absurd and dramatically loaded to the back-end whirlpool. In selecting the hop varieties, I focused on tropical fruit-forward hops. I’m not a huge fan of the more resinous/dank IPAs out there (like Stone Ruination), so I avoided certain hops like Columbus, Simcoe, and Chinook which can be a bit abrasive. During the boil, there was a small addition at the beginning to help keep the kettle foam down and lay down a low base of bitterness. The amount of bitterness required to balance this beer is minimal due to the low residual sugar levels. The key is obtaining nearly all of the bitterness during the whirlpool rest, which has the added benefit of imbuing a high level of hop flavor and aroma to the beer. Once kegged, I treat the beer with a huge dry hop.  I tend to limit the contact-time with dry hops since I’ve found that only bad flavors (grassiness) are gained after day three. It is important at this stage to thoroughly flush the vessel you’re dry hopping in with CO2 as oxidation in hoppy beers can seriously impact the life of the beer.

Yeast:
WYeast 1056 American Ale™ – Build appropriately sized starter
Pitch yeast once beer is at 62°F. Keep beer at 64°F during the start and peak of fermentation. Slowly raise to 70°F as signs of fermentation taper off.

Judged as a BJCP Category 14B American IPA

Aroma (11/12):
This is quite possibly the hoppiest IPA I’ve ever stuck my nose into. The intensity of the hop aroma could very well have surpassed the limits set by the best commercial hoppy beers out there. Huge amounts of tangerine-like citrus, mango, and sweet orange jump from the glass. The hopping levels exceed the levels described in the BJCP guideline which currently doesn’t reflect the intense aromatics found in the best examples of contemporary IPAs. A low bready malt character is barely apparent behind all the hops.

Appearance (1/3):
The beers pours a light golden hue with a high level of murky hop haze. A fluffy white head forms and easily persists to the bottom of the glass. This is not a pretty beer… and I’m okay with that.

Flavor (17/20):
The hop bombardment carries through to the flavor, leaving only just a hint of any malt behind. The hop flavor fills your mouth with intense fruit flavors and a hint of pine resin. A touch of grassiness was apparent when the beer was initially kegged, but eventually dropped off as the beer aged out. A bit of warm alcohol is apparent and reminds me that this beer pushes the alcoholic boundaries for a standard IPA. The bitterness is medium high and lingers a touch in the finish, along with a huge amount of hop flavor. Very dry malt, with fruity hops giving a slight impression of sweetness.

Mouthfeel (5/5):
Somehow this beer manages to feel dry and round at the same time. My suspicion is that the hop oils contribute a beautiful silky mouthfeel.

Overall Impression (10/10):
This beer goes above and behind the levels of hops that the BJCP describes for American IPAs. That said, it truly reflects contemporary examples of the best IPAs currently produced in the commercial craft market. The beer is dangerously quaffable. A world-class hop delivery vehicle. 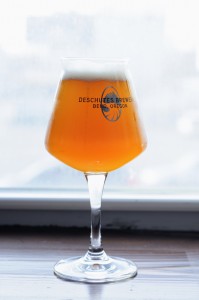 Stylistically, I find IPA to be one of the craft beers categories with the most variation. There are many popular IPAs that have almost no malt character, while others are relatively robust and judicious in their application of toasty and caramel flavors. Some are absolute hop bombs with robust flavors of citrus, pine resin, grass, spice, and tropical fruit, while others tend to portray a more nuanced hop character. All IPAs should lean towards the bitter side, but some are so excruciatingly bitter they make you wonder if you’re damaging your tooth enamel. Some IPAs are daringly dry while others retain a hint of residual sweetness. Many are lower in alcohol—and could be argued to be pale ales—while others blur the line between single and double IPA. With this recipe, I was shooting for something towards the middle, in terms of alcohol, malt, and bitterness, while taking hop flavor and aroma to an extreme level.

Judged as a BJCP Category 14b. American IPA.

Aroma (8/12):
High level of hop aroma which prominently features grapefruit zest upfront and a touch of pine resin in the background. There is a whisper of stone fruit (peach?) in the aroma that is quite pleasant. Some grassy, dry hop characters come out as the beer warms which lends an earthy and spicy component to the aroma. The hops are perhaps a bit muddled in their presentation. The malt aroma is very low and a bit indistinct letting the hops shine. There is no perception of caramel malt on the nose. No alcohol, DMS, or other off-aromas. Very clean fermentation character with no perceptible ester.

Appearance (2/3):
The beer is a deep golden hue with hits of red that push the beer to being nearly a copper color. There is a very distinct haze, but not nearly as muddy as some commercial beers I’ve sampled. A nice off-white, sticky head persists until the beer is finished.

Flavor (14/20):
This beer has a very strong hop flavor that couples with a firm hop bitterness. The flavors are somewhat reminiscent of the white pith of a citrus fruit. There is a touch of slightly vegetal/grassy hops on the finish. The relative depth of color in this beer would make you think there would be some fairly strong malt components to the flavor. This is not the case. The beer exhibits only a hint of light toasty malt that is difficult to extract from the large amount of hop flavor. The bitterness is clean and crisp, but perhaps a bit too intense. There is a hint of residual malt sweetness that is a touch heavy.

Mouthfeel (3/5):
Medium-bodied with a firm, clean finish. There is just a hint of residual sweetness in the finish. The beer is slightly over-carbonated giving the beer a prickly mouthfeel which improves once the gas subsides.

Overall Impression (6/10):
This is a nice IPA that showcases American hops in all of their brashness and intensity. There aren’t any of the tropical notes that are found in some of the most popular contemporary examples which may detract from in its popularity with beer geeks who tend to chase the latest novel hop flavors. This beer is right in the middle of the BJCP style, but could get dinged for not having quite enough malt depending on what a particular judge is looking for. In future recipe iterations, I plan to slightly lower the hop bitterness and further dry the beer out to allow for the hop flavors to shine even more brightly. Additionally, I will likely not use Columbus again for this beer as I feel it contributed to some of the rougher hop flavors this beer exhibits.