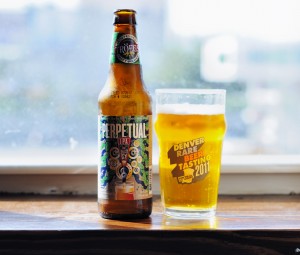 East coast IPAs are frequently eclipsed by their hoppier west coast cousins. This was especially true a couple of years ago, before wildly popular beers like Heady Topper and various offerings from Hill Farmstead stormed the national beer stage. Of course, like all generalizations, there are certainly exceptions. More and more east coast breweries are shifting production towards the market’s demand for over-the-top hop aroma and flavor and producing beers like Perpetual IPA; a beer that makes the west coaster in me feel right at home.

In our constant evolution as a brewery, we’ve developed an undying drive to meld the organic and the mechanical. Perpetual IPA utilizes our hopback and dry-hopping to engineer a bold Imperial Pale Ale. It features Bravo, Chinook and Mt. Hood hops in the boil, Mt. Hood and Nugget hops in the hopback, and is further dry-hopped with Citra and Cascade hops. 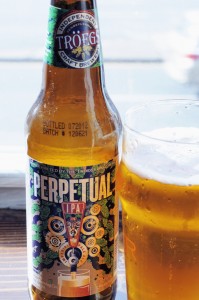 Aroma: A thick luscious hop aroma fills your nose–reminiscent of tangerine, mango, and a touch of pineapple to go along with a small amount of classic grapefruit. Almost no malt aroma makes it through the hops, but what is evident has a very lightly toasted French bread quality. After further contemplation, some very light spicy hop notes are evident as well as a hint of pine forest. The hop aroma is the star here with many layers and a deep complexity. 12 / 12

Appearance: Near-crystal clarity with a hue that is only a couple shades deeper than a classic pilsner. Billowy off-white head forms sticky foam that resists until the last drop. 3 / 3

Flavor: Like the aroma, the flavor is dominated by hops. Grapefruit becomes more evident in the flavor, perhaps due to the fruitiness combining with the hops bittering qualities. There is a very light toasty malt component that needs to be searched for. Only the slightest hint of alcohol comes through; an impressive feat in a beer of this size. Personally, I love the flavor of this beer, but to better fit the style, it would require a little more malt complexity. 14 / 20

Mouth Feel: This beer is very dry and drinkable. The bitterness is firm, but on the low end of the style when compared to other commercial examples. I actually prefer this to the bracingly sharp bitterness of many IPAs. The body is medium, medium/light with a level of carbonation that is quenching but not harsh. 4 / 5

Overall Impression: A very well-balanced beer. The massive hop aroma and flavor is varied and intense while the relatively easy bitterness keeps the beer from being harsh and enhances its ability to be consumed one after another. I love this beer and hope to find a less-expensive source of it so it can become a routine drinker. It’s interesting that the label refers to this beer as an ‘Imperial Pale Ale’ rather than ‘India Pale Ale’–perhaps this is an allusion to the lean malt character and restrained bitterness? 8 / 10

Note: Evaluation done according to BJCP Scoring System. This beer was reviewed as a Category 14b. American IPA.