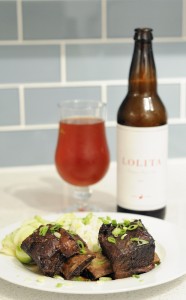 Taking short ribs–a tough cut of meat full of connective tissue and fat–searing it and then slowly braising it in beer (or other liquid) can do amazing things. The Belgians do it with their Carbonade as do the French with their Beef Bourguignon. The result is a succulent, flavorful piece of meat that falls off the bone. The fat renders out of the meat, leaving behind some of the most tender morsels you can hope for. For this recipe, I’ve introduced an Asian-esque marinade for the short ribs prior to braising and then served it with a fresh cucumber salad and steamed rice. I then paired it all with Lolita from Goose Island.

Cooking from a recipe is not my style. Unless I’m baking and producing some sort of preserved or cured product, I rarely follow a recipe. Instead, I’m a firm believer in understanding the techniques (and the reasoning behind them), using the flavors I like, and tasting during prep to achieve these flavors. This recipe starts by marinating the short ribs for several hours in a combination of soy, rice vinegar, mirin, sugar, ginger, garlic, chili paste, and a touch of sesame oil.  After several hours of marinating, preheat the oven to 300° F and begin heating some oil in a heavy skillet (that has a lid). Once the oil is very hot, sear each short rib (you may need to do it in batches) on all sides. Remove the ribs and then deglaze in the pan with about 12 oz. of beer. I used PBR because its neutral character wouldn’t conflict with the already bright flavors in the marinade. Add the ribs back to the pan and place in the oven (covered) for about 3 hours or until fork tender. For the last 30 minutes of cooking, remove the lid and baste every 5 minutes with the braising liquid. Serve with steamed rice and cucumber salad. The cucumber salad was quick-pickled (for about 5 hours) in a mixture of rice vinegar, salt, and sugar. 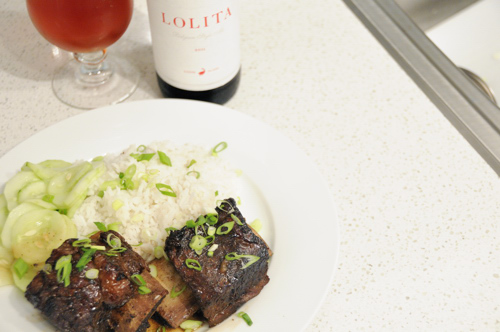 Sweet, savory, salty– all rolled into one

So, was it any good? 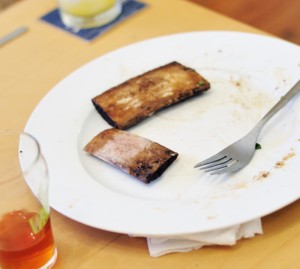 Individually, both the plate of food and the beer were killer. The high point of the pairing was how the acidity of Lolita helped cleanse the palate and wash away some of the heavy fatty aspects of the short ribs. Additionally, the beer had an almost wine-like character and hint of oak tannin that also helped balance the richness of the meat.  The biggest issue was that the heavy raspberry flavor in the beer clashed with some of the umami-like beef flavors in the ribs.  Additionally, the cucumber salad provided a nice acidic counterpoint to the rich beef, making the acidity of the beer redundant and unnecessary.