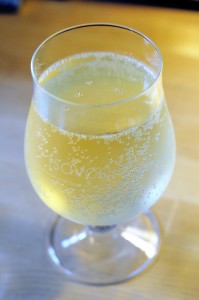 This cider started off as a 1-gallon experiment in which I took a preservative-free farmer’s market apple cider and fermented it with a mixed culture of microbes grown up from a number of different sour beers. The cider went from 1.050 OG to 0.99 leaving behind a whopping 7.84% ABV.

Aroma (6/12)
Initially there is a faint whisper of bruised green apple which is quickly overcome by the by-products of fermentation. There a pleasant barnyardy Brett character that is slightly musty and borders ever-so-closely to the mousey descriptor often used in funky beers with negative connotation. There is just a hint of tannic/earthy apple skin on the nose. There is no hint of the phenolic plastic / adhesive strip aromas that seem to dominate many of the Spanish / Basque funky ciders.

Appearance (2/3)
Straw yellow — almost looks like a white wine. There is a light haze. Bubbles form around the rim and quickly dissipate, much like a sparkling wine.

Flavor (10/20)
Apple character is almost non-apparent and comes off slightly watery. Austerely dry with no apparent alcohol. The is an interesting grain-like nuttiness reminiscent of Cheerios that is somewhat intriguing, but perhaps a touch out of place. The funky Brett character perceived on the nose isn’t quite as intense in the flavor.

Mouthfeel (3/5)
Moderate carbonation that quickly dissipates. The combination of carbonation and acid leaves the cider with a slightly sharp impression.

Overall Impression (6/10)
This was a fun experiment and good foray into the world of funky ciders. In the end, the amount of apple flavor left behind was a bit disappointing. Additionally, the mixed fermentation did not create as much acid as I had hoped. Further back-sweetening to enhance the apple character, as well as a dose of acid would dramatically improve the overall impression of this cider. In future experiments, using a blend of apples selected for their suitability in hard cider production would likely create a better end-result.