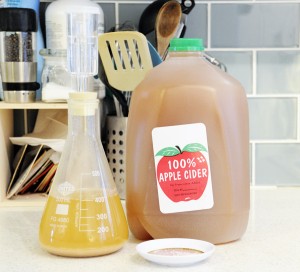 Making hard cider is stupid-easy. My 1-gallon experiment included pre-pressed cider, a 200ml slurry of my house “bug” culture, and a small addition of nutrients. The up-front investment of time was approximately 30 minutes.

Fall in New York. A chill in the air, leaves on the ground, and a butt-ton of apples at the green market. During a recent trip to the Grand Army Plaza market, nearly every purveyor of produce was selling a variety of apples. Along with these apples came the real prize — jugs of apple cider. The trick is finding minimally processed juice unadulterated with Potassium Sorbate. Sorbates create a stable product by inhibiting the yeast’s ability to reproduce. This works great at preventing cider from inadvertently fermenting and becoming alcoholic, but also makes the juice tough, if not impossible, to use for the production of hard cider. After talking to five different stands selling sorbated juice, I found Tree-Licious Orchards out of Warren County, NJ. Their juice was not only sorbate-free, but had already begun to show the tell-tale signs of early fermentation. 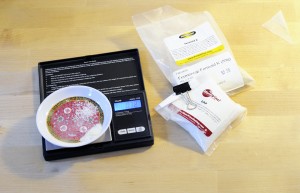 This past NHC, Chris Baker gave a talk about cider and suggested that juice should be supplemented with Fermaid-K and DAP to help ensure a healthy and complete fermentation. His suggested rate was 1/2 tsp. Fermaid-K and 1/4 tsp. DAP per five gallons. After measuring and weighing out the nutrients, this works out to 0.54 grams Fermaid-K and 0.31 grams DAP per gallon of juice.

There is a good amount of precedence for making funky ciders. The Spanish have a knack for making tart, dry, complex, Brett-bombs; a naturally occurring event if the native yeast and bacteria residing on apple skins are left to their own devices.

My goal with this experiment is to produce a cider with a healthy dose of bacteria-derived acidity to make up for the fact that the juice I used was likely comprised of primarily culinary apples containing little balancing acid and tannin. With some luck, the acidity will help balance out the cider while preventing the cider from becoming too watery or austere. 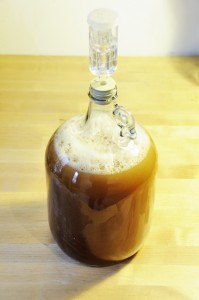 One gallon of funked-up cider ready to start fermenting.

Juice:
1-Gallon Non-Sorbated Cider
My juice had a starting gravity of 1.050. If this ferments out completely, it should leave me with a 6.5% ABV cider.