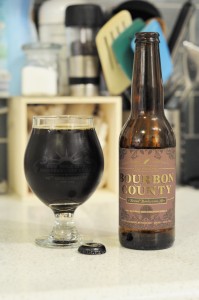 ‘Tis the season for Goose Island’s annual release of their Bourbon County line of beers. With this year’s release, the product line has grown to include a barrel-aged English-style barleywine in addition to their very tasty imperial stout offerings. Beer geeks around the country are giddy at the thought that this beer could be of the same lineage as King Henry — many a beer geek’s White Whale. It’s been over a year since I’ve sampled King Henry, but if my memory serves me correctly, this is a relatively similar beer.

Aged in the third-use barrels that were once home to Kentucky bourbon and then our renowned Bourbon County Stout, this traditional English-style barleywine possesses the subtlety of flavor that only comes from a barrel that’s gone through many seasons of ritual care. The intricacies of the previous barrel denizens – oak, charcoal, hints of tobacco and vanilla, and that signature bourbon heat – are all present in this beer. Hearty and complex, Bourbon County Brand Barleywine is a titan and a timeline; a bold, flavorful journey through the craft of barrel aging.

Aroma: (10/12)
Lots of big, sticky malt dominates the aroma. Most apparent on the malt side is a rich and luscious deep caramel as well as some molasses. There is a ton of pleasant oxidized malt character reminiscent of dark fruit and tart cherry — likely a consequence of the micro-oxidation that occurred while in the barrel. There is a surprisingly light oak character that has hints of vanilla and toasted coconut, which blend well with the base beer. Some hot alcohol is apparent, but it is minimal considering the high ABV. No hop aroma.

Appearance: (2/3)
Very deep mahogany — almost black. The beer is clear with a minimal tan head. This is an attractive beer, but a few shades too dark for the style.

Flavor: (16/20)
There is a richness to the malt that fills the palate with flavors of dark caramel upfront and toasty biscuit and bread crust on the back end. Again, there is lots of oxidized malt that comes off as raisin-like in the flavor. There is some definite boozy hot alcohol, which actually helps balance the heavy-handed malt sweetness. The hop bitterness is barely enough to balance the large amount of sweet malt. The bourbon flavor is definitely present, but not nearly as intense as other beers in the Bourbon County line.

Mouth Feel: (2/3)
“Chewy” is a fitting description of the mouthfeel. The beer is slightly slick and leaves the mouth a bit tacky and sticky. The carbonation is very soft, which serves to enhance the full-bodied nature of this beer. The beer is a bit syrupy on the finish, which detracts from the overall impression of the beer.

Overall Impression: (8/10)
This is a big and intensely complex malt-bomb. If that’s what you’re in the mood for, this beer will greatly exceed your expectations. A touch more attenuation seems like it would help the beer out in terms of drinkability (if there is such a thing for a 12.1% beer). There are some prominent oxidized notes in this beer that are pleasant, but not something I’d want to enhance by aging the beer any further. This would work well as a dessert beer or replacement for something like a Sauternes paired with a Roquefort cheese.