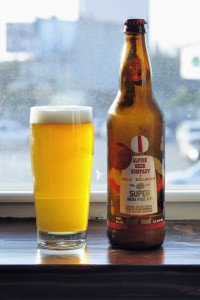 The nature of the craft beer movement encourages trends. Currently, it seems that collaboration beers are all the rage. Stone does it all the time (even with homebrewers) as does Russian River, Deschutes, Hair of the Dog, and many of the greatest breweries in the country. Super IPA is a collaboration between one of the biggest craft brewers (New Belgium) and one of the smallest and most sought after (Alpine Beer Co.). At first glance, this seems like an amazing opportunity for a small and critically-acclaimed brewery to get distribution well-beyond their typical geographical influence. Unfortunately, while quaffable, this beer misses on many marks which would have made it amazing.

The Alpine Beer Co. and New Belgium have come together for the love of IPAs. This collaboration is hop-wonderful with Amarillo, Columbus, Simcoe and Centennial hops, bringing the bitter all the way to the front. A nice balance is present with Pale, C-80 and Carapils malts, but the tropical and citrus tones of the American hops dominate. This Super IPA pours a sheened copper and carries a bright, white head. Consider yourself a hero for getting an  Alpine beer outside of San Diego.

Aroma: Big green grassy raw hop aroma. Hops are quite resinous and herbal. This beer is dominated by Columbus hops, which are very rough around the edges. There are some nice mango and tropical fruit notes which seem bullied by the heavy piney and grassy characters. Little to no malt aromas are present on the nose; quite characteristic of Alpine’s other offerings. This beer smells like homebrewed beers I’ve had that sat too long on the dry hop. 5 / 12

Flavor: Big grassy raw hop flavor. Lots of resin on the palette. The flavor is pretty one-dimensional and dominated by the grassy / herbal hop flavor. There is a very light sweetness / honey character to the malt, but it is by no means easily perceived. This is a very smooth beer whose bitterness is quite low for the style, but balances with the dryness of the beer. This is where I see Alpine’s biggest influence.  11 / 20

Overall Impression: Alpine is known for producing over-the-top hoppy beers with huge tropical fruit flavors and very lean malt profiles. I feel like this beer tried to hit those notes, but fell short in the hop selection arena. I can’t help but think that perhaps the need to produce New Belgium scale quantities of this beer forced the hand of the brewers into compromising on their hop selection; using massive quantities of Columbus hops which come off harsh, grassy and herbal in this beer rather than the more tropical varietals like Amarillo and Simcoe listed on New Belgium’s website. The malt is perfectly in line with Alpine’s tradition; dry and lean which would set the stage perfectly for a cleaner, fruitier hop experience. Unfortunately, this is where it falls short. 5 / 10

Note: Evaluation done according to BJCP Scoring System. This beer was reviewed as a Category 14c. Imperial IPA.