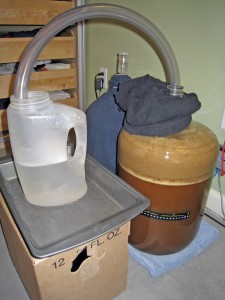 The Satisfying Rhythm of Yeast Blowoff

…and that’s okay. Seriously. It is kind of mind boggling the number of times I’ve heard people claim that homebrewing will save you money. I feel like these people are somehow missing the point of the hobby and taking a simplistic look at the actual costs of brewing. It’s one thing to advocate for the hobby (which is why I write this blog), but you need to present realistic expectations for new brewers. If trying to save money is why you’re homebrewing, get out now. There are plenty of other (and better) reasons to homebrew.

Let’s look at the basic economics of making a 5-gallon extract batch of beer of average gravity and hop levels on the simplest (cheapest, lowest quality) system out there that does not include kegging, temperature control, liquid yeasts and starters, wort cooling devices, and assumes you are using recycled bottles for packaging. I am using an extract beer for the model because typical statements about the cost of homebrewing are targeting new brewers who will likely start with extracts.

The following will make 5 gallons of 1.054 beer at 50 or so IBUs that should ferment out to 5.3% ABV. Let’s call it a simple American Pale Ale (not unlike Sierra Nevada Pale Ale). Prices are quoted from Northern Brewer (one of the cheapest shops around) and do not include tax or shipping. This model makes a lot of assumptions, one of which is that you care about the quality of the beer you’re going to make. You could easily throw table sugar, water, and bread yeast together to make alcohol, which would get you drunk. It also assumes that you want craft beer. You won’t be able to brew a Miller Lite clone cheaper than you can buy it in the store. This recipe would produce something comparable to a lot of craft beers out there, especially if care is taken along the way.

Equipment is the hardest cost to quantify due to the mind-boggling options out there and the time period which the costs should be spread over. Because of this, it is often altogether overlooked. What I’ve specified above is the most basic kit you can get. You’ll likely add (a lot) more stuff to this to increase the quality of the beer and decrease the amount of labor involved. For the sake of simplicity we won’t account for this. We’ll divide the equipment cost over 12 batches because you’ll likely either quit the hobby or move on to more advanced brewing requiring more advanced equipment by the time you do 12 or so extract batches. This leads to an equipment cost of $9.58 per batch.

Most brewers yield about 48 – 12oz bottles of beer from a 5-gallon batch. The loss in volume is due to racking, spillage, trub loss, hop absorption, etc. That is a per bottle cost of $1.02 if you’re really pinching pennies and being careful along the way.

A 12-pack of Sierra Nevada (one of the cheapest and best American Pale Ales out there) will run most people in most areas about $11.99 or about $1 per bottle.

If you are trying to clone Sierra Nevada Pale Ale, your homebrew will cost about 2 cents more per bottle than buying the genuine product at the store. This doesn’t take into account the fact that your time is worth something (an extract batch will take 4-6 hours of your time when you take into account packaging) or the fact that you’ll likely want to use liquid yeast and make upgrades over the simplest setup out there.

If I’m hell bent on saving money, how can I?

Even doing all of the above, you’re still going to have a tough time making it pencil out when you take into account equipment costs (as well as the desire to brew the best beer possible) and not simply something that will give you a buzz.

At the end of the day, brewing your own beer is awesome. You can create amazing beers that mimic those commercially available or let your imagination run wild and dream up your own creations. I brew for the pure satisfaction of crafting something delicious with my own two hands. Brew for these reasons not because you’re trying to save money.

Are you a brewer saving money making your own beer? I’d love to hear your comments below! Please tell us what you’re doing to make beer cheaper than what can be purchased commercially.

7 thoughts on “Homebrewing Will Not Save You Money…”