For those of you not immersed in the world of commercial beer geekery, let me tell you a story. This is the tale of a noble and regal beer. King Henry as he was called began his life as a massive English Barley Wine from the Goose Island brewery. Once fermented, he was left to rest inside oak casks which began their life holding Pappy Van Winkle bourbon and later the Rare variant of Goose Island’s Bourbon County Brand Stout. After an extended slumber, the sweet nectar was packaged and released to the masses for enthusiastic consumption and hoarding within dark cellars. King Henry became well-known throughout the land and developed a reputation of mythical stature.

Goose Island last released King Henry in 2011. Now that Goose Island is an AB-InBev owned and produced brand, it is pretty unlikely that it will ever be brewed again. 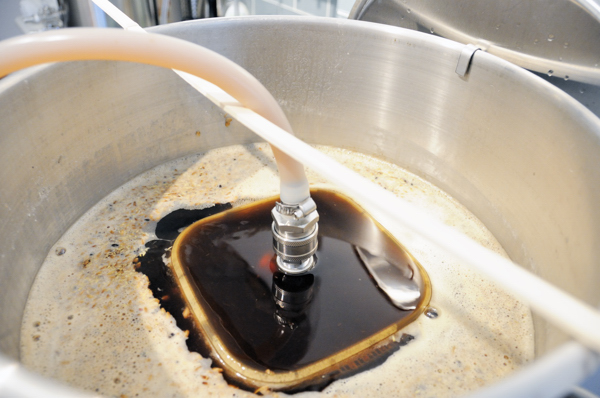 Now some bad news — I’m not going to publish the recipe for this clone.

A homebrewing friend of mine was able to obtain the precise recipe from which the commercial beer was produced. With this information in hand, I was able to accurately formulate a scaled down homebrew recipe. This information was given to me with the caveat of not sharing it with the world.

As much as I wish that I could publish the recipe, Goose Island’s website actually gives some good information which can be used to formulate a recipe. Key metrics such as ABV and IBUs are listed, as are the malts and hops used. I can verify that my recipe is very much in line with the ingredients listed on the Goose Island website. The signature malt in this beer is a seasonal product called Caracrystal from by Briess Malting — something that the recipe formulation should account for.

I built up a massive pitch of yeast with the hope of fermenting out this extremely high gravity beer. Violent fermentation ensued, which is only now tapering down a week later. Once terminal gravity is hit, I intend to rack the beer into split secondaries containing oak cubes treated with varying spirits. With some luck, this beer will be finished and packaged sometime in February or March 2014. Stay tuned for a full review then!