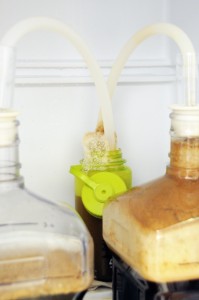 My Parabola clone explosively fermenting away.

One of the greatest things about homebrewing is that it enables you to dissect commercial beers and make your own attempts at brewing beers of a similar nature. Precise replication is rare, even when you’re working from a proven recipe, but the exercise in itself is enjoyable, and the beers typically turn out quite tasty.

Back in 2011, I was inspired to take a shot at cloning Firestone Walker’s Parabola, and posted a quickly cobbled together recipe on HomebrewTalk. Now, a couple years later I’ve finally gotten around to taking a shot at it.

The recipe below was put together while carefully tasting the commercial beer and reading through the information published on both bottles of Parabola and on Firestone Walker’s website. The information that is out there indicates a very complex malt bill; something that makes determining the precise percentages of each malt somewhat of a shot in the dark. That being said, I’ve based the recipe on typical uses of those grains and what I’ve been able to taste in the commercial beer. The actual brewday was quite uneventful, and the beer is happily fermenting away. My plan is to transfer it onto oak in secondary and to let it rest until next April, which happens to coincide with the annual commercial release of Parabola. Stay tuned for future posts reviewing the beer and indicating how close this recipe replicates the commercial beer.

Secondary:
Split into 1-gallon vessels with oak soaked in bourbon.

The beer has unfortunately stopped fermenting at 1.044. The taste is quite nice and is by no means cloying. The high gravity however makes me slightly nervous as my eventual plan is to bottle condition the beer. I pulled a sample and preformed a force ferment test on it. The force ferment test confirms that there is no residual fermentable sugars left in the beer. Next round, I will likely lower the mash temperature and decrease the crystal malts to achieve a more fermentable wort. In the mean time, this beer tastes quite good and is aging on bourbon soaked oak cubes.