Primary fermentation for my Lambic-like beer was completed using Wyeast 3278, a Lambic-inspired blend consisting of a Belgian Saccharomyces strain, a Sherry strain, two Brettanomyces strains, a Lactobacillus strain, and a Pediococcus strain. The ratio of each microorganism is meant to emulate the exponentially more diverse cultures found in spontaneously fermented beers. Many brewers report that this particular blend tends to produce beers of much less complexity and acidity than what is found in traditional Lambics. In an attempt to add a bit of diversity to the microorganisms in my beer, I cultured and grew three different commercially available beers. Each of these were subsequently pitched into individual 1-gallon secondary fermenters containing the beer fermented previously with Wyeast 3278. 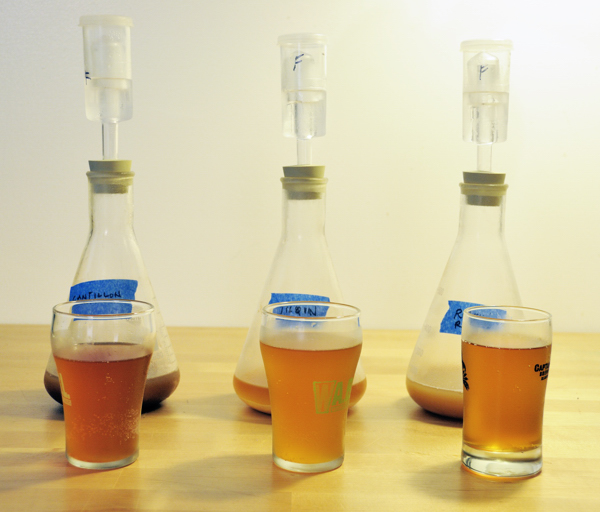 Growing up Your Cultures

Culturing yeast and bacteria from commercial bottles of beer is a fairly straightforward process. The main requirement is that the beer must not be filtered or pasteurized and is as fresh as possible. Luckily, this applies to many different craft beers. A little Googling will typically help you figure out if the commercial beer you’re wanting to grow yeast from can be successfully cultured.

Step 1 – Drink the Beer
It would be criminal to not consume the beer you’re culturing dregs from. Upon opening the bottle, I carefully flame the opening with a lighter. The intent is to grow what is living inside the bottle not whatever might be hanging out on the outside. I then carefully pour the beer into a glass, leaving as much sediment as possible in the bottle.

Step 2 – 200ml of 1.020 Wort
Before opening the bottle, I have 200ml of 1.020 sanitary wort made, chilled, and ready to go. To create this, I combine 12 grams of dry malt extract, a pinch of yeast nutrient, and 200ml of water in a 500ml Erlenmeyer flask and boil it for 5 minutes on the stove top to sanitize before chilling in a water bath. I pour this chilled wort directly into the bottle containing dregs, swirl it up, and cap it with a stopper and airlock. When culturing the low cell counts found in bottles of beer, I like to use an airlock to hopefully limit the amount of oxygen in the bottle and decrease the likelihood of something like acetobacter growing within. I leave this at room temperature for at least a week.

Step 3 – 200ml of 1.060 Wort
For the next step, I prepare 200ml of 1.060 wort in a 500ml Erlenmeyer flask (34 grams DME). I then swirl and pour the entire contents of the bottle I’m culturing into the concentrated 1.060 wort. This dilutes the wort back down to a reasonable growing concentration (1.040 or so) and has worked well for me as a second step. Again, I use a stopper and airlock to limit O2 availability. I let this ferment out for at least a week.

Step 4 – Chill, Decant, & Pitch
At this point in the process, I am able to see some fermentation activity in the flask. Once activity slows, I chill the culture for a few days to let it settle out, and then carefully decant and pitch the slurry. The amount of viable microorganisms in solution at this point works well to give additional character to beers, which have already been partly or completely fermented. If I wanted to use what I’ve grown as a primary fermenter, it would require an additional starter and step-up in order to produce enough viable yeast for primary fermentation.

So, how do they taste?

Before pitching my grown dregs, I tasted each sample and took notes for future comparison with the finished beer. I also wanted to ensure that none of the samples contained hints of acetic acid; which could be indicative of the presence of acetobacter which could spoil the beer.

Tilquin Gueuze Culture
Nice big, tart lactic nose. Some nice funky Brett horse blanket character with a touch of plastic phenol. Some tropical fruit esters, which are pretty nice. This beer has the most Brett character and sourness of the three cultures. This beer is the driest of the group yet pours with an odd-looking viscosity — probably the ‘ropey’ character often attributed to Pediococcus.

Russian River Beatification Culture
The sweetest and least fermented of the group. Tamest beer in terms of traditional Brett funk and sourness. This sample had a great tropical nose that is probably a Brett-derived ester. Very pleasant. It’ll be interesting to see where this one goes.

How about the base beer?

At the time that I racked the base Lambic to secondary it had fermented from 1.047 to 1.014 over the course of two weeks. It appears that the turbid mash produced the low fermentability I was hoping for.  The beer has a big peppery saison-like character with only a hint of tartness or Brett funk. The biggest surprise was the substantial hop bitterness and tannin in the beer. I used de-bittered hops, purchased directly through Hops Direct, which appear to have contributed a considerable amount of bitterness. I’m hopeful that since this is a long-term project the bitterness will age out. My primary concern is that the hop alpha acids will inhibit the lactic acid bacteria I’m hoping takes hold and sours the beer over time.