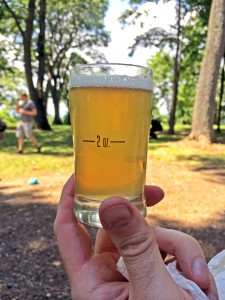 Both SMaSH pilsners were brought the annual NYC Hombrewers Guild picnic — the perfect beer on a hot summer day.

About 6-weeks ago I brewed a couple of SMaSH pilsner lagers, inspired by Firestone Walker Pivo Pils, and featuring 100% Weyermann Pilsner malt. For hopping, one was brewed solely with a new German varietal called Mandarina Bavaria, where-as the other was brewed with the more traditional Hallertau Mittelfruh.

Rather than do a full BJCP-style evaluation of each beer, I’ll describe the malt and yeast  character present in both beers, and then attempt to describe the real hop character differences that exists between the beers.

Malt Character:
Clean and crisp is the best way to describe this malt. I was able to achieve 80% + apparent attenuation which lends a nice lean character without becoming watery. Although I missed the very high level of attenuation found in Pivo Pils (88%), this beer still captures the dryness that makes Pivo so great. The standard Weyermann Pilsner malt I used has a nice light bready, and ever-so-slightly grainy character that is very nuanced. This is a great neutral malt that begs to be set down as a base to bounce other flavors against. The Weyermann malt does not feel as round and bready as other pilsner malts I have used, in particular Dingemans pils from Belgium which features an almost honey-like sweetness. Using this malt in this manner clearly illustrates how similarly colored malts from different maltsters can have dramatically different characteristics.

Yeast Character:
Unfortunately, the homebrew shop I purchased from did not have the Wyeast 2124 lager yeast used by Pivo Pils in stock. As a back-up, I brewed with my go-to lager yeast WLP833 from White Labs. This yeast performs superbly, attenuating well, and cleaning up any residual diacetyl. There is a very light fruity ester present in the beer, but other than that, the beer is clean and neutral, setting the table to showcase the hops and malt.

Hallertau Mittelfruh Hop:
This hop look you straight in the eye and without blinking proudly proclaims its German heritage. This hop features a classic, and very nuanced herbal quality. When searching, there is a low white pepper note as well. On the finish is a slightly grassy, almost tea-leaf like flavor which I attribute to the fact that I needed to use nearly twice as much of this hop to hit the same IBU levels provided by the higher alpha Mandarina Bavaria. The quality of the bitterness in this beer is very smooth, and does not linger.

Mandarina Bavaria Hop:
Mandarina Bavaria is often cited as a next generation German varietal being bred to compete with the novel hop varieties being grown in the Pacific NW. True to its name, this hop has a nice round sweet mandarin and tangerine flavor that comes across almost as candied orange that while present, is much more subtle than the citrus displayed by other types of hops. Additionally, there doesn’t seem to be any of the bitter, pithy citrus character that is found in many varieties. There is none of the pine or resin flavors which dominate other hops. This hop does not match the brash intensity and massive oil levels found in the newer American hops. This hop works really well in this beer, providing a sweet citrus component without dominating the malt or other lager characteristics. Mandarina Bavaria shines in more nuanced beers, but probably won’t be able to stand up to the Simcoes, Citras, or even brasher South Hemisphere hops that dominate the IPA world. That said, there is a definite place for this hop in the ever-expanding tool chest of hops modern brewers have access to.