Like most Americans growing up in the 80’s and 90’s, duck was not something my family or I ever ate. Huey, Dewey and Louie were entertaining TV characters that never found their way to my dinner table. As my food experiences expanded and I began seeking out new foods, I was quickly indoctrinated into the Church of Duck. In many ways, duck is the perfect poultry—far superior to the mass-produced manufactured chickens most people eat. Modern chickens have been bred to be lean with massive breasts (insert joke here). The duck’s beauty is much more Rubenesque; a thick layer of fat underneath their skin keeps them warm in the water and succulent on our plates — something simply not found in most poultry. This high ratio of fat is easily rendered to cook all sorts of things in. One of my favorite things to do is confit duck legs in the fat and then make rillettes out of the cooked meat.

Note: This recipe was adopted from Michael Ruhlman and Brian Polcyn’s book Charcuterie. This book goes into great detail about confit, rillettes, and the broader world of charcuterie. 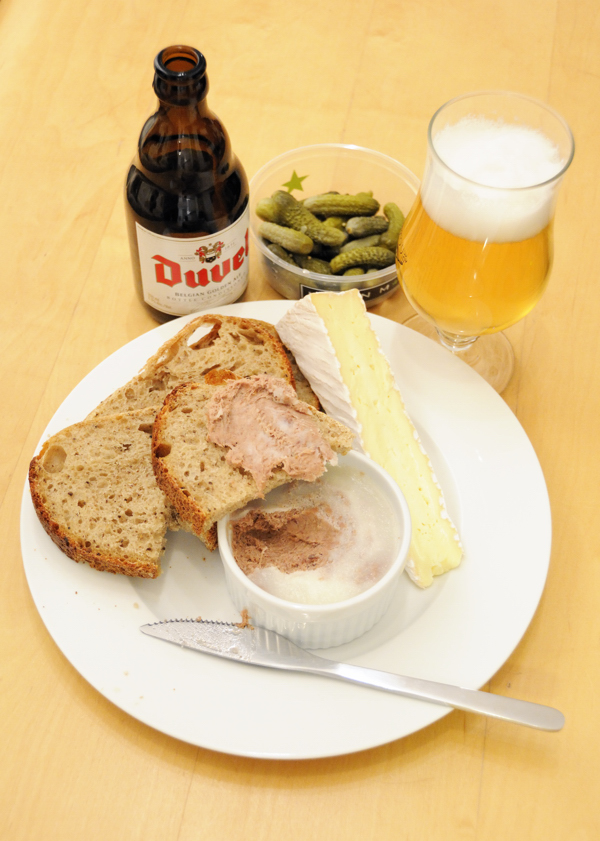 Duck rillette smeared on freshly baked spent grain sourdough bread. Pairs well with Duvel or other dry and effervescent Belgian ales that can cut through the fatty richness of the duck while complementing the light gamey qualities of the rillette. 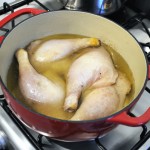 Duck legs in melted fat ready to go into the oven. 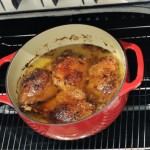 The confit is almost done and ready to pull from the oven. 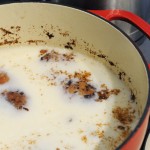 Fat cools and solidifies around the meat.

Confit sounds much more complicated and haute cuisine than it really is. Like a lot of ‘gourmet’ food, it has modest roots as a food preservation technique used to help even out seasonal surplus and shortages of food. Confit is simply the process of poaching meat in a bath of fat at a low temperature over a long period of time. The fat is cooled and solidified, encasing the meat in a fatty tomb free of oxygen, allowing it to be preserved for long periods of time.

Confit techniques can be used with all sorts of proteins and fats. In this case, I used duck legs with duck fat as the cooking medium. The first step is to take duck legs (I used four) and dry cure them with a mixture of salt and herbs (garlic, clove, bay, and pepper all work well). This is then refrigerated overnight, drawing moisture from the meat, deeply seasoning it, and imparting a preservative quality.

The next day, the meat is thoroughly rinsed and then gently cooked at the lowest setting your oven can manage — generally around 200°F — submerged in the duck fat (I used about 1.5 pounds). It is important to do this uncovered so that any moisture can evaporate. Once the duck legs sink to the bottom of the pan and the meat begins to fall off the bone (about 6-8 hours), it is done. From there the dish is allowed to cool. The fat solidifies, encasing the meat. At this point I like to refrigerate the entire thing allowing the meat to ‘ripen’ anywhere from a week to a month during which the flavor will improve. 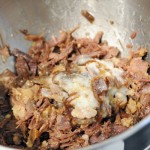 Duck meat, fat, and confit jelly ready to be pulverized. 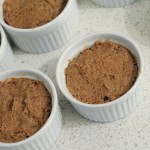 The paste is spread into ramekins and then capped with melted duck fat. 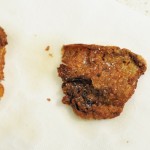 My inner fat kid could not resist frying up the duck skins in their own fat.

Duck confit is a wonderfully versatile ingredient to have on hand for use in a variety of dishes. Reheating the legs in a frying pan and crisping up the skin makes an absolutely succulent and delicious main course. Another option is using the confit as an ingredient for another dish such as cassoulet. With this iteration, I opted instead to pick the meat off the bones (setting the skin aside) to make rillettes.

A rillette is essentially a creamed paste consisting of confit meat, a touch of duck fat, and a portion of the gelatinous ‘confit jelly’ that settles to the bottom of the confit pan. These ingredients are blended to taste with an appropriate level of seasoning (a word of warning, confit jelly can be extremely salty) and then capped with a layer of melted duck fat which solidifies and gives the rillettes a great shelf life.

Once complete, the rillettes are stored in the fridge and can last months. They are delicious with some crusty bread!