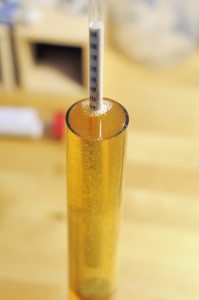 Brewday went nearly perfectly — gravity was spot on at 1.061.

Update: Unfortunately, the beer didn’t place in the second round of NHC. It did get pretty good scores however. I’ve uploaded the score sheets, in case you’re curious.

I’ve had some good luck in the first round of this year’s National Homebrew Competition. Both my Vienna Lager and Belgian Blond ended up taking first in their respective categories. I’ve always thought that placing 30% of your entries in a competition of this size is a great average, so I was pretty stoked to have pushed through half of my entries.

Unfortunately, I didn’t have any additional fresh bottles of either ready to go, so re-brews were in order. My biggest concern brewing this beer is that the Duvel strain (Wyeast 1388) can be a bit finicky. The krausen almost always drops early, followed by a slow period of 5-10 days in which CO2 continues to be produced and the beer continues to dry out. Additionally, this yeast seems to produce a lot of banana ester early which dissipates and becomes much more mellow after a period of lagering at near freezing temperatures. I am a bit apprehensive that both of my second round entries will be younger than I would like.

As a Belgian Blond, my Spawn of Duvel recipe is well below the low end of gravity for the style. That said, it still tastes like a great version of the style. For my re-brew, I’ve slightly bumped up the gravity in hopes that it can stand-up to the higher gravity beers it will be competing against in the second round.