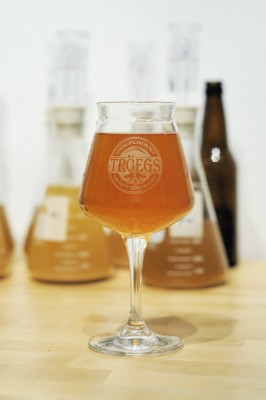 After slightly more than a year in a corny keg in the corner of my living room, my 2014 Solera beer was ready to produce its first round of finished beer. From the 5-gallon corny, I bottle conditioned 2.5 gallons of aged sour beer. On the same day, I topped the corny keg back up with 2.5 gallons of another batch which had already gone through its primary fermentation (recipe below). With this round of top-up beer, my goal was to steer the Solera towards a more traditional lambic-style wort while also inoculating the Solera with a more diverse culture that includes Wyeast 3278 Belgian Lambic Blend as well as microbes grown up from Sante Adairius Cellarman. My goal is to produce more acidity in future pulls from the Solera.

Mash Profile:
With this recipe I completed a fairly complex turbid mash routine that involved taking the mash through a number of temperature steps. To get from 113 °F to 136 °F I used a simple hot water infusion. To get between the other steps, I pulled varying amounts of the thin portion of the mash, heated it to 185 °F, and then returned it back to the mash. The goal was to create a dextrinous wort that can provide abundant complex carbohydrates for an extended mixed-culture fermentation.

Aroma (6/12):
Low to moderate lactic tartness on the nose, no real perception of acetic or other acids. There is a medium to medium-high peppery phenol accompanied by medium Brett aromatics reminiscent of hay, earth, and leather. There is a relatively strong, tart pie cherry Brett character, which is pretty nice. Some toasty malt hides behind the fermentation aromatics and features a touch of honey-like malt sweetness. At the very end there is a bit of rubbery phenol that isn’t particularly pleasant.

Appearance (0/3):
Deep gold with a light haze. No head whatsoever, although abundant fine bubbles rise from the glass. The head appears to be a casualty of the proteolytic lactic acid bacteria in the mixed culture.

Flavor (10/20):
The beer approaches the palate with a very lean and slightly toasty malt profile. Despite using aged hops that were labeled with 0% alpha acid, there is some definite low to medium hop bitterness that feels a bit out of place in the beer. Acid levels in the beer feel quite low compared to most commercial beers, exhibiting only a mildly acidic lactic tang. Overall the beers is quite mellow and austere. There are some biting phenolics on the finish that are a bit harsh.

Mouthfeel (1/5):
Very low body with a sharp carbonic bite. There are some tea-like astringent components that do not pair well with the sharp carbonation. The carbonation comes off almost soda-like.

Overall Impression (7/10):
In general, this beer comes off quite simplistic, especially considering the complexity of its fermentation and aging. The overall acidity levels could certainly be increased to round out the mouthfeel and bring another layer of complexity to the beer. As it sits now, it is primarily a showcase for Brettanomyces in both a pleasant sense (pie cherries) and negative sense (harsh phenolics).