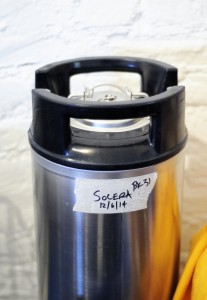 Solera is a traditional production method commonly utilized by wine (Sherry, Maderia, Port) and vinegar (Balsamic, Sherry) producers to craft long-aged products. In a nutshell, Soleras work by never completely emptying the vessels in which the liquids are aged. When a product is packaged, a percentage of the liquid is left in the storage vessel and topped up with fresh un-aged liquid. The idea is that a percentage of aged liquid is always left in the aging vessel, effectively allowing all packaged versions to end up with a final product containing a variety of vintages, some of which can be extremely old depending on the age and number of cycles a Solera has been through. This can help to unify any seasonal variation between batches, but also allows products containing substantial amounts of young liquid to taste much more aged than it would taste on its own.

Reading Michael Tonsmeire’s American Sour Beers convinced me that building a sour beer Solera was a wonderful idea. Solera production lends itself perfectly to sour beer production due to the inherent aged nature of these beers, and the similarities between Solera and traditional Gueuze production.

To start, I’ve dedicated 5-gallon Corny keg to Solera sour beer production. Initially I filled the keg with 5-gallons of beer that was fermented out in a primary vessel using Wyeast’s Roeselare blend of microbes. The base beer I am shooting for will be a fairly neutral golden sour that can act as a somewhat generic background for future Solera batches. My plan in a year is to pull half of the contents of the Solera and package it as-is. From there I will top it up with another fresh batch of beer and begin the process again. In theory, this will create an annual pipeline of sour beer which I can package as-is, or use for other projects (other blends, fruiting, dry-hopping, etc.). Additionally, the new beers added annually to the Solera can be used to steer the flavor profile of the beer in the Solera, through both recipe formulation and microbe content, in different and hopefully interesting directions.

Mash Regiment:
The mash was taken through the steps below. I use a direct fire recirculating mash to transverse the steps.