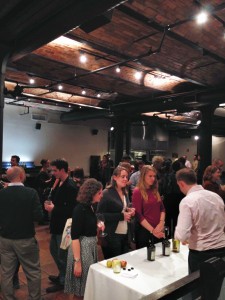 Christian Drouin Calvados was the highlight of the night.

Cider is an enigma to me. I’ve never really understood its appeal and have typically written it off as something designed for those who enjoy sweeter beverages or those whose tastes are more inclined towards fruity drinks. I know there is more to it than that, but I’ve always tended to gravitate towards beverages I know I’ll enjoy and limit my explorations to the beer and spirit worlds.

With this in mind, I reviewed the events of New York Cider Week and came across Applepalooza, which could be just the thing to push me into the world of fermented apples in its various forms.

Applepalooza featured 13 different makers of either cider or Calvados (a spirit created from distilled hard cider). All of this was held at Astor Center, an events center of sorts above Astor Wines and Spirts, a fine bottle shop in its own right (no beer there, but we can forgive that).

Working my way from table to table, one thing became remarkably clear; I hadn’t given cider the respect it deserves as a complex and varied beverage. Were there big sweet cloying messes? Yes. Were there ciders that tasted like tannic, watered down Motts? Yes. Putting those aside, I found some very nice ciders that fit my tastes. The biggest surprise for me was the number of ciders that featured the unmistakable wild kiss of brettanomyces in their profiles. Some of these ciders were phenomenal, while others unfortunately had a huge plastic / burnt rubber phenolic that made them dumpers. Without further adieu, my top 3 and bottom 3 ciders of Applepalooza.

Doc’s Draft Hard Apple Cider – The perfect touch of brett in a hard cider. It put off a distinct barnyard character that blended well with a nice full fruit flavor, touch of skin tannin, and medium sweetness that rounded out the mouthfeel and was cleaned up by the cider’s effervescence.

West County Cider Redfield – Nice complex apple flavor with a good round mouthfeel. Semi-dry but not watery (like a lot of the dry, low alcohol ciders). Quite tart, which helped cut some of the residual sweetness. Light hint of funk.

Eden Vermont Ice Cider, Heirloom Blend – Yes, I said I don’t like sweet ciders. The sweetness in this ice cider teetered on the edge of cloying. To me, this was quite reminiscent of a Sauternes and exhibited a very nice honey character. I couldn’t drink a ton of this, but it’d make a very nice dessert drink.

Trabanco / Isategi Ciders – I wanted to like these. They had a great funky barnyard nose that was almost Gueuze-like to me. Unfortunately, after drinking them, they also had a big band-aid note similar to the Valveran ciders.

Eden Ice Cider Orleans Apertif – Way too much basil in this one. Completely clashed with the apple character and was all I could taste.

Christian Drouin was pouring their Selection, 1992 Vintage, and 25 Year Calvados. The Selection–quite young compared to the 1992 and 25 Year–exhibits a really nice fruit character. The oak is subdued, but has a hint of vanilla and butterscotch. It is a steal at less than $23; and I was happy to take one home with me. The 1992 vintage had much more oak, exhibited a big butterscotch nose, and had just a hint of fruit. The 25 Year was beautiful. It had layers of aroma including tobacco, butterscotch, vanilla, toasted bread, and on and on. To me, its only detractor was the lack of any fruit character. I would have loved to bring home either the 1992 Vintage ($134.99) or the 25 Year ($143.99), but the cost is simply a little rich for my blood, especially when I can spend 1/3 of the cost on a good single malt or bourbon of equal complexity.