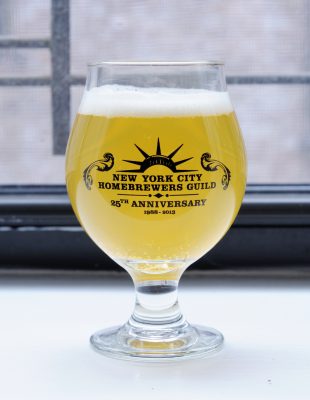 The leftovers from a broader Gueuze-like blending session, transformed with apricot.

Over the course of three years, I brewed three different three-gallon batches of sour lambic-like beer that were ultimately further split into single-gallon vessels and fermented individually with a total of nine different mixed cultures. The end goal of this process was to select the best five gallons of beer and blend out a classic version of Belgian Gueuze-style beer.

While I was pretty happy with how the base blend turned out, I was left with an additional four gallons of beer that was less than stellar. The primary fault in these beers was that I dramatically over-hopped the early batches with roughly 1 oz. / gallon of aged Cascade hops. Even though these hops were declared to have 0% alpha acid by the vendor whom I purchased them from, they still managed to impart a fair amount of bitterness and astringency. I have since read accounts from other brewers, including Jester King, who relayed similar stories about the dosing rates of aged hops in their early spontaneous beer experiments. According to Jester King’s blog, they currently use approximately 1lb. / barrel (0.5 oz. / gallon) of aged hops in their spontaneous beers.

Rather than toss the beer outright, I opted to rack the best three gallons into a new vessel and have it go through a secondary fermentation on three pounds of apricot puree. This was allowed to ferment for another four months before being packaged and bottle conditioned.

Aroma (7/12):
Overripe, juicy apricot is the primary aroma component, although there are some low, funky Brett aromatics that are somewhat grassy and hay-like. For being such a complex aged beer, the nose is rather simple, but still inviting. Malt character is almost nonexistent though there is a touch of light crackery malt.

Appearance (2/3):
The beer pours a hazy gold with a bright white, tightly bubbled and persistent foam.

Flavor (8/20):
Juicy apricot flesh is supported and enhanced by a medium-plus lactic acidity and sourness. There is an unfortunate bitterness and slight astringency that comes off somewhat harsh against the acid. The finish has a touch of an odd, somewhat metallic flavor that is hard to put a descriptor on. Brett funk is pretty demure on the palate and only comes off as a bit of earthy grass with the slightest whisper of plastic. The malt manages to be a touch bready and soft.

Mouthfeel (1/5):
The beer has a medium body with fairly low levels of carbonation. More fizz would help lift the beer off the palate and, perhaps, allow a little more complexity to pop on the aroma. There is a tannic astringency that is not particularly pleasant.

Overall Impression (5/10):
Given that the origins of this beer was the rejected blending components from my gueuze blending session, I am happy that the beer retains a level of drinkability that wasn’t present in the individual blending components. The apricot has helped to soften the harsh bitterness and tannin from the original beers; although, not to the point where it isn’t a distraction on the palate. My hope is that as this beer continues to age, some of the harshness will mellow. Time will tell.