This time of the year is awash in bloggers writing about the best things they discovered over the previous year. While somewhat self-indulgent (yes, I’ll admit it), it’s a fun way to look back over the course of the previous year, reflect upon what you have done, and really think about the moments that wowed you.

2012 was a banner year of sorts. It was my first time attending the National Homebrewers Conference, I moved across the country from Seattle to Brooklyn, and I started this blog. Plenty of memories were made and many more were fuzzied by delicious beers.

Without further adieu, my…

Best Beer Fest: Cask Beer Fest, Seattle, WA
I attended seven beer festivals this year including the biggest one in the country, GABF. There are huge differences between the fests I’ve attended in Seattle and those held in Brooklyn. In Seattle, the booths are staffed with brewery representatives who strive to bring interesting and seasonal beers; something I’ve found lacking so far with NYC events. The epitome of this was Cask Fest held last March at Seattle Center. The venue is great, the brewers brought an excellent variety of cask ales, and the crowd was friendly and enthusiastic. It was easily my favorite fest of 2012. Hopefully in 2013 I’ll discover some east coast fests striving for equally high standards.

Best Session Beer: Happy Hops, Russian River Brewing Company, Santa Rosa, CA
At 5.5% ABV this hoppy pale ale pushes the limit of what some would consider to be sessionable. I tend to disagree since for me, the biggest key to making a session beer is keeping the beer light enough to consume in quantity while maintaining enough depth of flavor to keep you going back. Happy Hops is layered with many levels of hop flavor and aroma making it a beer that continues to evolve as you drink. The malt is crisp and slightly toasty, but has very little caramel or sweet malt flavors which tend to become heavy.

Best Brewpub Experience: Ladyface Ale Companie, Agoura Hills, CA
Classy decor, friendly staff, and a wide variety of delicious beers made for a great time at Ladyface. The only downside was their strip mall location.

Most Memorable Beer: Selinsgrove Barrel Aged Wee Heavy, Selinsgrove, PA
Like manna from heaven, this beer was placed in front of me on the last day of my cross-country brewery tour. I tried many, many beers on this road trip; this beer stands heads above the others. It was complex, slightly smoky, full bodied and creamy, and had tons of vanilla. Perhaps I have a soft-spot for scotch ales placed into barrels, but this beer was absolutely marvelous. 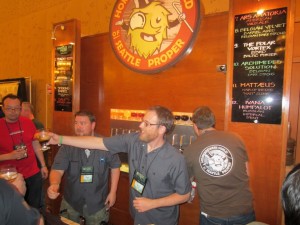 Best Event: The National Homebrewers Conference, Seattle, WA
Yes, it was pretty awesome winning a Gold Medal in the National Homebrew Conference. Even better, however, were the great friendships that were solidified, new friends that were made, and information that was learned. I am especially proud of the awesome booth the Homebrewers Guild of Seattle Proper built and the amazing job we did serving really good beers.

Top 5 Beers (Since Arriving on the East Coast)
There were so many outstanding beers made in 2012 that it is tough to narrow it down to 5. In order to make my task easier, here are the top 5 I’ve had since relocating to Brooklyn. The East Coast and Brooklyn, in particular, gets distribution of some really awesome beers I previously didn’t have access to. This list is quite evocative of my taste for hoppy or barrel aged beers.

In 2013, I look forward to brewing again and writing about the expolits here–hopefully in a more steady fashion. Here’s hoping that 2013 is as good, or even better, for all of you!