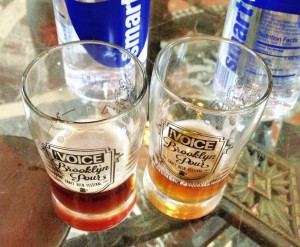 October 6th, 2012 was an important date. Five years earlier, this Homebrewer was lucky enough to marry The Homebrewer’s Wife. It also happened to be the date of the second annual Brooklyn Pour. The Brooklyn Pour was my first beer festival since moving to Brooklyn and my awesome wife was happy to attend it with me. So we made our way to the Williamsburgh Savings Bank Tower, sampled beer, soaked in our surroundings, and toasted another year of wedded bliss. 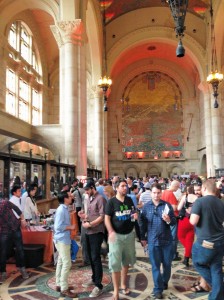 The old Williamsburgh Savings Bank Tower is gorgeous. The pictures of the the main hall of building, where most of the breweries were pouring, don’t do it justice. This space is hands down the coolest place for a beer festival I’ve been to. About two-thirds of the beers were being poured in the main hall, while the other third were located in the basement vault. The capacity of these spaces worked well for the number of tickets sold, resulting in pretty much non-existent lines and a level of crowding that was energetic but not claustrophobic. I especially appreciated the plentiful glass tables in the main hall that gave plenty of space to rest your beer and take notes. There was a DJ playing music that fit well with the youngish crowd. My only complaint was that it was very loud and made conversation difficult, particularly in the already very acoustically live basement vault.

Stations Located in the Basement

The crowd was great. It was not the over 40 typical beer geek crowd I’ve become accustomed to at other festivals I routinely attend. I love both types of crowds, although probably fit better into the latter. The crowd here was young, enthusiastic about trying new beer, and far hipper than myself. I saw very little over-consumption, something that must be commended especially in a festival that offers unlimited pours.

The manner in which the beers were presented sucked. There really is not a nicer way to say it. The vast majority of breweries in attendance were having their beer being poured by BenchMarc Events, whose employees had no clue what they were doing. On three occasions (Allagash Curieux, Het Anker Lucifer, Ommegang Three Philosophers), I was poured the last yeasty dregs from a bottle conditioned beer. I was literally given two ounces of murky yeast for my pour. Additionally, these folks had no idea what they were pouring; for example, Allagash Curieux was described as a ‘Belgian White’ by its server. For all intents and purposes, these people are representing a brewery’s brands and beers at these events. It seems that blindly sending your beers to these events is only handicapping your promotional efforts and not presenting your beers in the best possible light. Element Brewing was a great exception to this. The folks pouring their beer actually knew about what they were pouring and the brewer was also there to answer more in-depth questions.

The glassware (actual glass, yeah!) for the event was great. A line denoted 2 oz. pours although the BenchMarc servers typically filled them to the brim (in spite of my protests). I ended up dumping a lot of excess beer into trash cans so I wouldn’t have to drink a bad beer and so I could sample as many beers as possible. Rinse water at stations and dump buckets were unfortunately non-existent.

By and large, the majority of breweries brought their flagship brands and perhaps a current seasonal. This was okay for me since I’m new to the east coast and there were plenty of things available that I haven’t had the opportunity to try. That being said, I’d imagine the selection was probably pretty boring to some of the more experienced beer samplers in the room. Of course, there are always stand-outs. Here are my top three beers followed by notes for the other beers I tasted.

Element Brewing Company – Altoberfest
Really nice big noble hop character. Firmly bitter, but with a nice supporting rich malt component. I’d hesitate to compare it to an Oktoberfest (far too hoppy), but it was a delicious Alt nonetheless.

Kelso – Rye Barrel Porter
So many barrel-aged beers present over-the-top spirit character paired with malt sweetness. That strategy has its place, no doubt. This beer was refreshing in its subtle barrel character and moderate alcohol. It was fairly dry, but had a rich caramel malt component that blended well with the vanilla and oak barrel characteristics.

Smuttynose – IPA
I found this beer to have a very interesting blend of Noble (earthy, herbal) and American (citrus) hops. It was balanced with a good amount of caramel malt and firm bitterness. Very drinkable, especially compared to many IPAs. 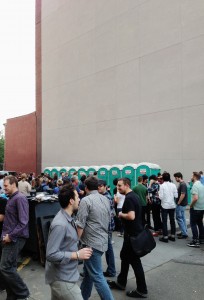 Long Lines at the Toilets

Would I go again?

Over and over at this event I felt the need to relinquish my perspective as a craft beer aficionado and advocate and simply enjoy this event for what it was, an afternoon spent in a beautiful venue, with great company, drinking beer that was pretty average. I kept telling myself it was important to temper my expectations and not put myself into a situation of comparing apples and oranges. The festival is very different than all of the other festivals I’ve been to. Namely, this is a festival produced by a for-profit enterprise. Most of the other festivals I’ve been to have been produced by trade organizations whose missions are to promote the industry and the brewers within. For what it was, I found it this festival to be a good time despite the noticeable hiccups. So long as you look at this as an opportunity to drink (mostly) good beer in a cool environment with a good crowd, you’ll have fun. Don’t expect to be blown away by rare or one-off beers. Don’t expect to chat with the actual brewers about their beers. Don’t expect beers to be poured properly by knowledgeable people. Do expect some average beers, a handful of exceptional beers, and more than a handful of dumpers.