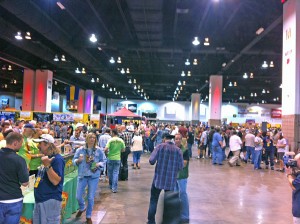 The Festival Floor at the 2011 GABF

GABF (Great American Beer Festival) is becoming an annual pilgrimage for me and a tradition I hope to carry on well into the future. There is nothing more sacred to a beer geek than this festival, which is an amazing opportunity to try thousands of beers not available locally. This will be my first year actually covering the event and I’ll be posting live updates via Twitter and Facebook throughout. ‘Follow’ or ‘Like’ The Pour Report to get live information straight from the festival. Once home, I plan to do a 3-part wrap-up covering each day of the event.

Highlights for me this year include:

The Sessions
I am excited to be attending the Thursday and Saturday Members Only sessions this year. There are in excess of 2,200 beers from over 500 breweries being poured. While I certainly won’t be trying all of them, I plan to do some serious ‘research’, focusing on breweries outside of my distribution region. The Brewer’s Association has published a list of the breweries attending. Needless to say, it is amazing. 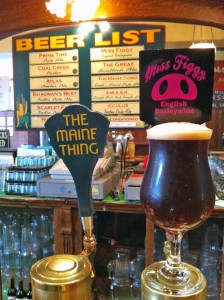 The Pro-Am Competition
This past spring, I was chosen by Big Time Brewery in Seattle, WA to collaborate on a beer for the GABF Pro-Am Competition. The winning beer that I created (and chosen by Big Time Brewery) is Miss Figgy, an English Barley Wine that was brewed with honey and aged on fresh Mission figs. Having moved before I was able to taste the finished product, I look forward to trying Miss Figgy at GABF. Miss Figgy will be poured during the Friday night session at the Pro-Am Booth (booth 35 in block C on the convention floor).

Pouring at the Festival
This year I was lucky enough to be able to obtain a brewers badge from Big Time Brewery. This means I can get into select brewer events and don’t have to wait in long lines; although I’ll probably forgo this privilege for the sake of not pissing off those in line. I’ll also be pouring Big Time Brewery beer at booth 2 in the Brew Pub pavilion (in the middle of the convention floor) during the Friday session from 5:15-8:00 pm. Come say hi if you’re around!

The Awards Ceremony
In the past, the GABF awards ceremony was held during the Saturday Members Only session on the festival floor. This year, in order to accommodate more breweries, the Brewers Association has scheduled a separate ceremony at a different venue to be held before the Members Only session on Saturday. As part of the Pro-Am Competition, I was allocated tickets to this event, which are not available to the general public. I’ll be live tweeting some of the results as they occur.

There are far too many breweries to create a broad and encompassing list of beers to try. That being said, last year there were certainly some highlights which I plan on revisiting, as well as some new breweries making a splash that I’d love to be able to try. In alphabetical order: