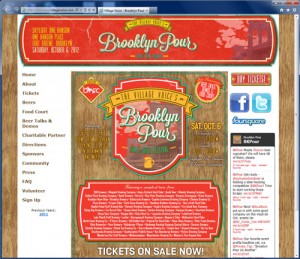 Note: Tickets are officially sold out.

A week from today (October 6) I’ll be heading over to the old Williamsburgh Savings Bank Tower building in Fort Greene, Brooklyn to attend the Village Voice’s 2nd Annual Brooklyn Pour. This event boasts 65 different breweries plus food, entertainment, and seminars over the course of two 3-hour sessions (1-4pm, 6-9pm). The general admission cost is $45 and includes unlimited samples (within reason). VIP admission (which includes complimentary food, a gift bag, access to a special mezzanine and special drinks) is also available for $65.

Brooklyn Pour’s website boasts an impressive number of breweries. Most of these are within the tri-state area along with a handful of breweries from across the states, as well as a few international breweries. The Village Voice currently does not have a list of the beers being poured. Fortunately, The Pour Report was able to contact some of the attending breweries and get information about what they would be pouring. Please note that this list isn’t 100% inclusive and is subject to change. If you’re a brewer coming to the event and would like your information posted here, please contact me and I’ll add it.

The Crowd and Venue

With 1,500 people attending per session and no limits on the number of pours, I expect this to be quite an enthusiastic crowd. The 60+ breweries in attendance should help minimize lines with exception of those breweries that manage to generate a buzz (pun intended). Skylight One Hanson is a beautiful venue that promises a great beer festival environment.

Are you planning on attending? What are you most looking forward to? Stay tuned for my post-event wrap-up!