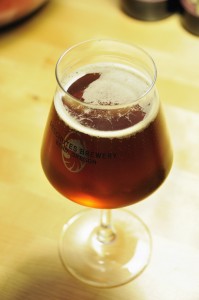 Six weeks have passed since I brewed my high gravity pumpkin ale. The base recipe for the beer was an English Barley Wine on the low end of the style category. The original gravity started at 1.077 and finished at 1.017, giving me an approximately 8% ABV beer.

My goal with this beer was to take take the pie crust malt character found in many commercial pumpkin beers and amplify it, while decreasing the spice intensity. Additionally, I really wanted to make a beer where you could actually taste the caramelized pumpkin that was added to the mash.

Judged as a BJCP Category 21A Spice / Herb / Vegetable Beer.

Aroma (10/12)
Big round malt on the nose that is quite full with lots of deep caramel, toffee, and a hint of honey. There is a definite vanilla aroma as well as some oakey bourbon. The spicing is quite low with cinnamon being the most readily apparent, along with some nutmeg that instantly combines with some of the whiskey aromas to become reminiscent of eggnog. There are some pumpkin aromas that come off as cooked squash. As the beer warms, there is a hint of alcohol heat and acetone.

Appearance (3/3)
The beer is a beautiful deep amber or garnet with reddish highlights. The beer is clear, but not brilliantly so. The head is off-white and persistent.

Flavor (10/20)
There are some intense crackery and biscuit malt flavors upfront that are a little more substantial than I would have liked. There is no hop flavor although the beer has a nice firm balancing bitterness. Caramel hits mid palate and gives an impression of sweetness. It feels like the melanoidin rich malt is combining with the spice and alcohol to give a somewhat harsh flavor on the finish. There is a earthy gourd-like flavor that reminds you that you’re drinking a beer brewed with a substantial amount of pumpkin.

Mouthfeel (3/5)
The beer is quite full, perhaps a bit too much. The carbonation is low, further enhancing the beer’s fullness and leaving the mouthfeel a touch flabby.

Overall Impression (5/10)
This is not a bad beer, but I wouldn’t say it is world-class either. The slight harshness from the very intense toasty flavors are a bit much and could be dialed down a bit. Additionally, the whiskey and vanilla notes, while interesting, could benefit from some restraint. The presence of actual pumpkin in the beer is very apparent and quite welcome. It is quite likely that the beer will mellow out and become much more enjoyable with some age.