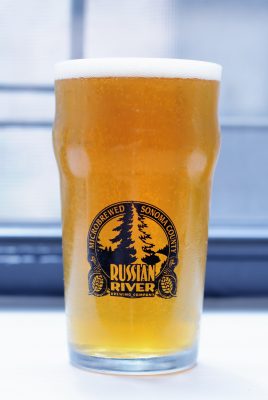 Don’t let the condensation fool you, our Cryo hopped pale ale turned out nice and bright.

One of the best things about the National Homebrewers Conference is getting to see new products. At this year’s trade show, I was excited to see Yakima Chief Hops (YCH) debuting a new product called Cryo Hops. Not only was YCH pouring several professionally-made beers using Cryo Hops, they were also giving away samples of the product.

Cryo Hops are created through a proprietary process that uses liquid nitrogen to break apart and separate the hop lupulin glands from the leafy bract material. This separation allows Cryo Hops to contain a much higher proportion of hop resin and essential oils, typically double what you would see in a pellet (by weight). This is a key point of interest for brewers as, in theory, it allows you to get the same hop effect in your final beer while putting less physical plant material into the beer. This should not only cut down on kettle losses, but also perhaps some of the more grassy harsh notes that hops can impart on a beer.

In addition to trying out the Cryo Hop product, I also wanted to test out fermentation hopping. There has been a lot of talk lately about the biotransformation of hop compounds that takes place in the presence of yeast. It seemed intriguing to try and add Cryo Hops to the fermenter early on in primary fermentation to see what the sensory impact would be. In some ways, Cryo Hops are perfect for this as they have less leafy plant material than normal hops. In theory, this means they can withstand the longer contact time needed to get through fermentation and cold crash without the beer becoming grassy—a problem typical of extended dry hop periods.

This recipe contains only a small bittering charge of traditional pellet hops. All hop flavor and aroma comes via fermentation hopping.

Fermentation Hopping:
Added during high krausen on day 2 of the primary fermentation. Left in fermenter for approximately 10 days until fermentation and cold crash was complete.

Judged as a BJCP 18B American Pale Ale

Aroma (10/12):
Very high hop aroma with tropical notes of mango and pineapple. Very bright and juicy. There is just a touch of white pepper on the nose, similar to the spiciness I sometimes get from eating actual mangoes. There is just a slight toasty malt component. Very clean with no real fermentation character or alcohol. No grassiness. Traditional brewing knowledge would lead one to think that a large portion of hop aroma would have been scrubbed by CO2 during primary fermentation. This beer seems to be an outlier from this typical assumption—perhaps the hop compounds metabolized and transformed during fermentation are less volatile?

Appearance (3/3):
The beer pours a deep gold with some slight copper notes. There is just a bit of light haze, topped with a very persistent off-white head. I was expecting much more turbidity given the amount and timing of the hopping. The beer is pleasantly bright.

Flavor (10/20):
The high hop aroma doesn’t seem to carry over to the same degree on the palate. The hop flavor is there, but not nearly as high as I would have expected based on the nose. It is hard to tell whether this is attributable to the lack of any real kettle hopping or the use of Cryo Hops. In either case, there is a certain amount of hop flavor I’d typically expect in a highly hopped pale ale that seems to be missing. The hop flavor is fruity, but a bit one dimensional. There is a nice maltiness to the beer that is toasty and biscuity. A medium bitterness accentuates what is already a very dry beer.

Mouthfeel (4/5):
The beer has a medium-low body with crisp carbonation. Dry. Refreshing. No astringency or heat.

Overall Impression (6/10):
This beer really shines on the nose, giving the pure essence of highly aromatic fruity hops. The flavor,vhowever, is a bit of a letdown considering the boisterous aromas. I like the malty components that are quite apparent, but may perhaps be a bit too flavorful for what was intended to be a very hop-forward pale ale. I think this beer could be improved with a large charge of traditional pellet hops in the whirlpool and perhaps cutting the Maris Otter base malt with a bit of Pilsner or standard 2-Row base malt.