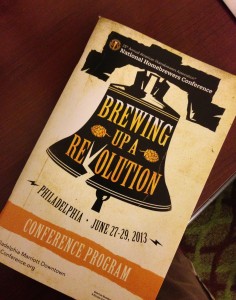 Free flowing beer, seminars given by people whose beer knowledge dwarfs my own, camaraderie with fellow beer geeks, and the chance to mingle with the pseudo-celebrities of our niche hobby are just a few things that awaited those who headed to Philadelphia for the 2013 National Homebrewers Conference. The conference has made a habit of being in my back yard two years in a row now, so making the trip to Philly was an easy decision. This was my second NHC, and from my limited experience, I’d say this is one show you don’t want to miss.

Each day of NHC offers between 3 and 5 separate seminar sessions to go to and learn about a variety of topics. Frankly, the seminars vary wildly in quality. Without sounding too much like a douche asshole, many of the presentations are either geared towards very basic topics, or presented by those that can’t seem to effectively present the thoughts in their heads. Since there are multiple seminars happening during each time slot, you have to make some educated guesses when picking which to attend. My strategy was to look at the credentials of the presenter first and choose seminars that seemed like they had a good chance of not sucking. My advice to the AHA would be to somehow pre-qualify their speakers. Additionally they could offer different seminar tracks based on a brewer’s level of knowledge or particular interests. Seminars are an opportunity to present new research or otherwise interesting information within the broad spectrum of topics that brewing embodies; unfortunately this is rarely the case. I’ll briefly run through each seminar I went to in a minimal fashion. If you’re an AHA member you can delve into each with more care, by (someday) downloading the presentations off the AHA website.

Process Improvement and Beer Enhancement: The Nano Experience – Andy Tveekrem
I was really hoping this seminar would discuss the trials and tribulations of operating a nano-brewery and challenges of process and quality control brewing on a small scale presents. Instead we got a brief overview of the speaker’s background and then a rundown on the basics of homebrewing. Not really worth the time unless you’re completely new to homebrewing and don’t know the basics of things like sanitation, yeast management, etc.

Methods of Maintaining a Wild House Culture – Kyle Kohlmorgen
The information that was presented was far too basic. I was expecting a talk about plating and isolating cultures, selecting for strains with positive brewing attributes, maintaining them in cold storage, and then propagating and blending to create new and interesting fermentations…or at the very least a talk about building and creating a consistent house culture.

Blame the Maltster: An Overview of Malting Operations and How They Influence Beer – John Mallett (Bell’s Brewery)
John presented a balanced in insightful talk about the decisions a maltster must make during the malting process and the balancing act that is required in order to create the best end product. A fair amount of the seminar was spent discussing malt analysis sheets. Hearing the perspective a large brewer brings to developing their malt specification and analyzing the specifications they actually receive was pretty interesting.

Because Not Every Beer is Stone Enjoy By IPA: Preserving Hop Aroma – Stan Hieronymus
While this seminar was mainly an overview of topics covered in detail within Stan’s hop book, his seminar did get the wheels in my heading turning on the topic of the bio-transformation of hop oils during the fermentation process. It is kind of mind-boggling that two different hop oils can be present pre-fermentation and be transformed into completely different compounds via yeast metabolism.

The Science of Beer Flavor – Roger Barth
A great speaker (with a PHD) presented what is happening on a neural level when we are experiencing the taste and flavor of beer. Well presented, humorous, and definitely worth revisiting.

Cider Revolution: How to Brew Great Cider from Everyday Ingredients – Christian Banker
Really dull, and somewhat insulting to those who spend a lot of time making ciders and blending apple varietals in order to create the end product they envision. Not really any new or interesting information.

Alternative Wood Aging Techniques – John Gasparine
One of the top three seminars. The speaker is not a professional brewer, but does consulting for those looking to add interesting, and unconventional wood flavors to their beers.

Step up Your Starters: Insight into Yeast Propagation for Homebrewers – Kai Troester
While there weren’t any earth-shattering new ideas presented in this seminar, watching Kai and getting a better understanding of the methodologies he uses was a joy. Kai is the mad scientist of homebrewers; any information he presents is always welcome.

Current Techniques and Recent Developments for Brewing Great IPAs – Mitch Steele (Stone Brewing)
The biggest idea and realization made in this presentation was that popular breweries who make great hoppy beers (like Stone) are often blending in portions of hops most homebrewers typically wouldn’t use in an American IPA as a way to add complexity and accentuate the beer’s hop profile. Hearing Mitch call Sterling one of his favorite hops was pretty eye-opening and makes me consider a lot of hop varietals I would have previously written off.

Hops vs Malt: A Smackdown with Cheese – Janet Fletcher 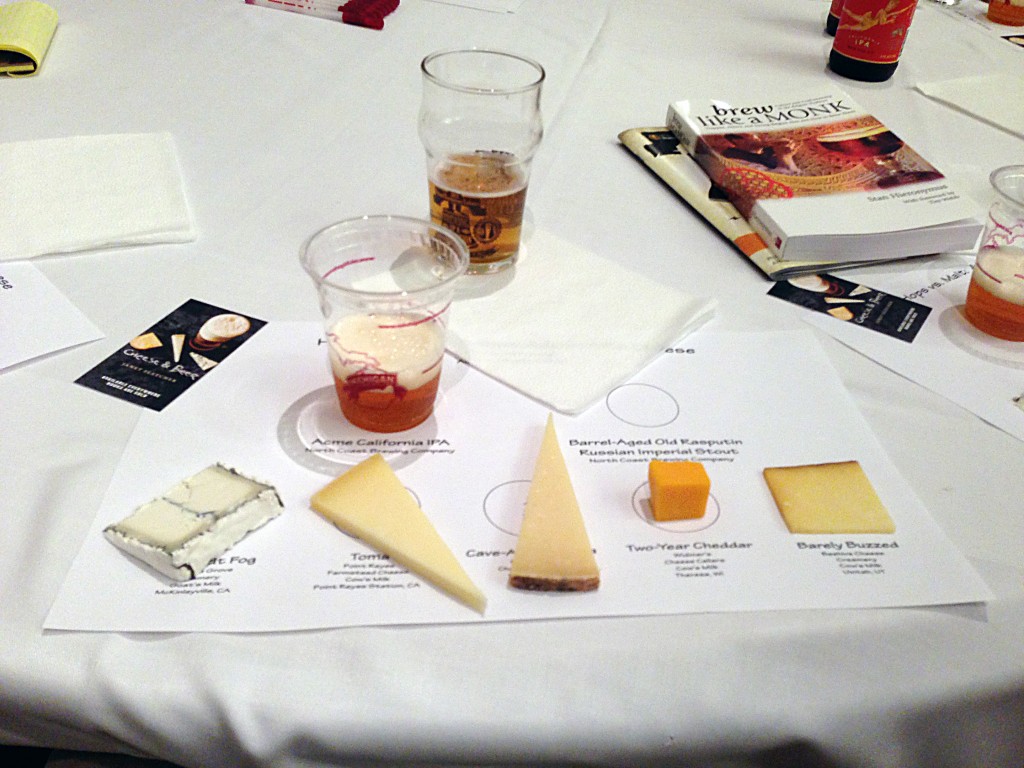 What can I say? Great beer and cheese is a no-brainer.

The hospitality sweet was great this year. While perhaps one in every five beers I sampled featured some sort of off-flavor, in general the beers were quite good. It was a lot of fun grabbing a homebrew and walking around the exhibition floor to check out all of the cool gadgetry. Blichmann in particular had some cool new products, including a stainless steel RIMS coil that plugs into their hop rocket shell and works with their controllers. There was also a company called Brew Station building some incredibly tricked out stainless rigs. Jess Caudill and Greg Doss were omnipresent at that Wyeast booth to answer your yeast questions. And of course, Sabco had their rigs setup at the show giving me an idea of what my homebrewery would look like should I win the lottery. 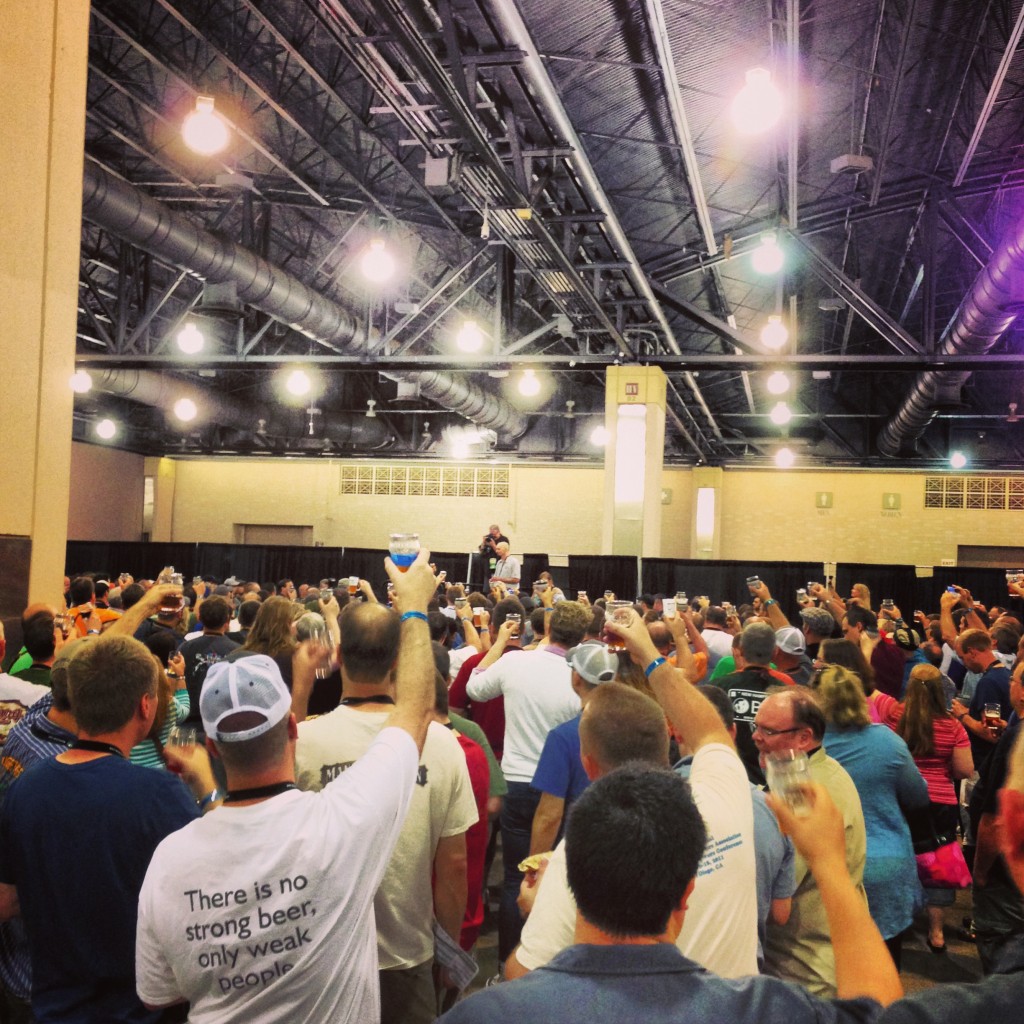 Opening Toast at Pro Night. No idea what was said, but fun none-the-less!

Pro-Night was a blast, although somewhat forgettable aside from Lagunitas having a fitting blow on one of their kegs sending a beer geyser 20 feet into the air. Don’t get me wrong, the pro-beer was great, but that really isn’t what NHC is about. That honor of course is reserved for Club Night, where the true creativity and skill of homebrewers is put on display. There were some phenomenal booths with unique designs and smart draft setups. Theatrics aside, it is really about the beer. There will always be dumpers when you’re sampling this quantity of homebrews, but in general the quality was very high. I was especially impressed by the large number of outstanding sour beers. This has to be the biggest trend that I noticed this year, along with the large variety of outstanding meads and ciders that were available. I was able to sample a lot of beers from a ton of different clubs and had a great time. If I had to choose one club that absolutely knocked it out of the park, it would be the Woodbridge Homebrewers Ale and Lager Enthusiast Society. Their booth was simple, but everything I sampled from them was outstanding, including some insane iced ciders. 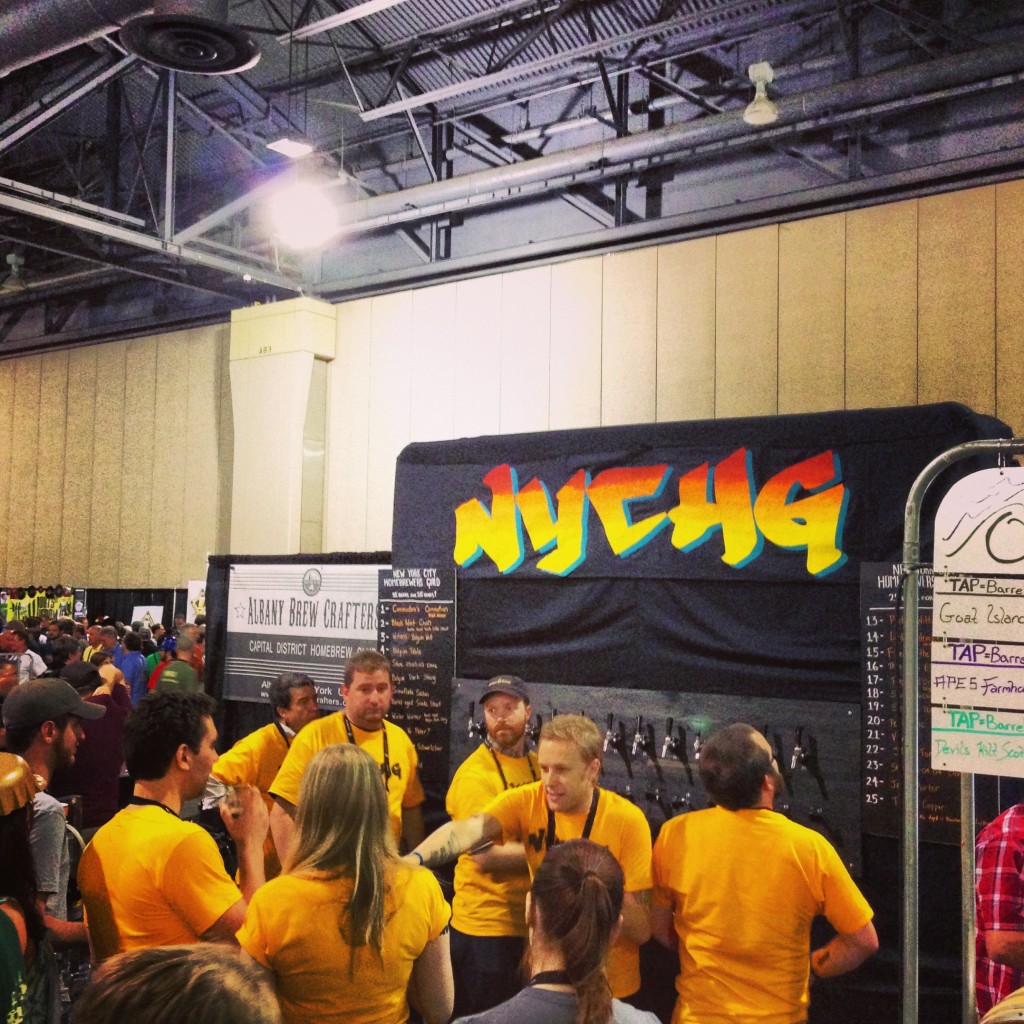 New York City Homebrewers Club Booth – The club that has taken in this lost West Coaster. 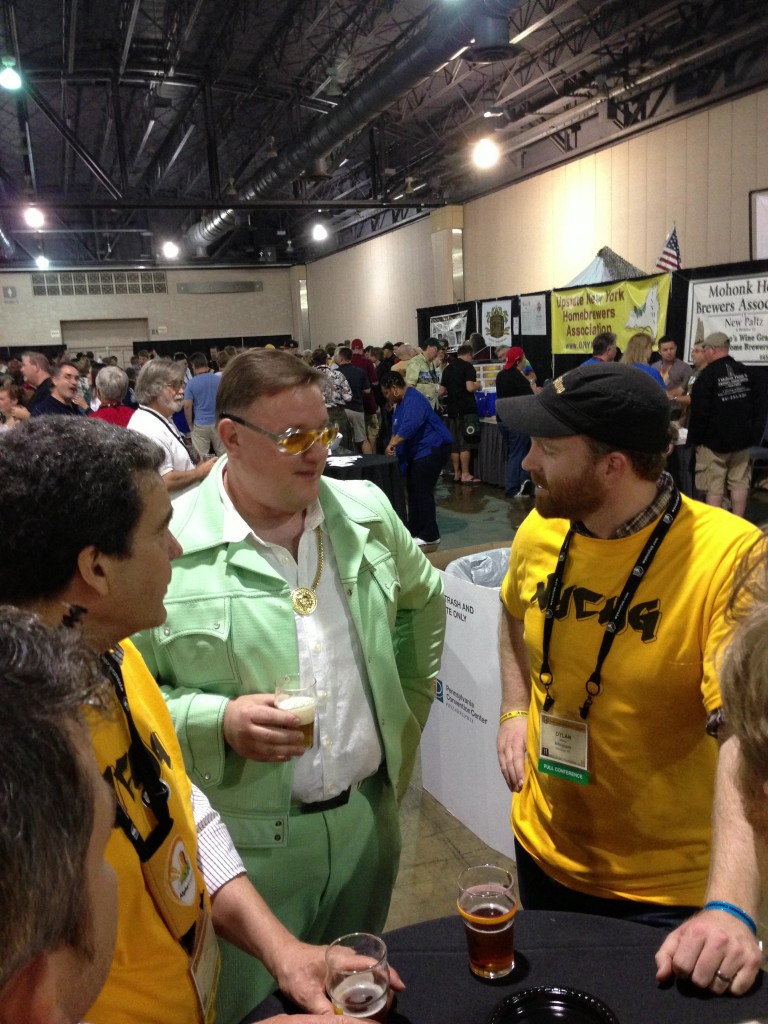 Whatever the topic of conversation was, you know it was awesome. 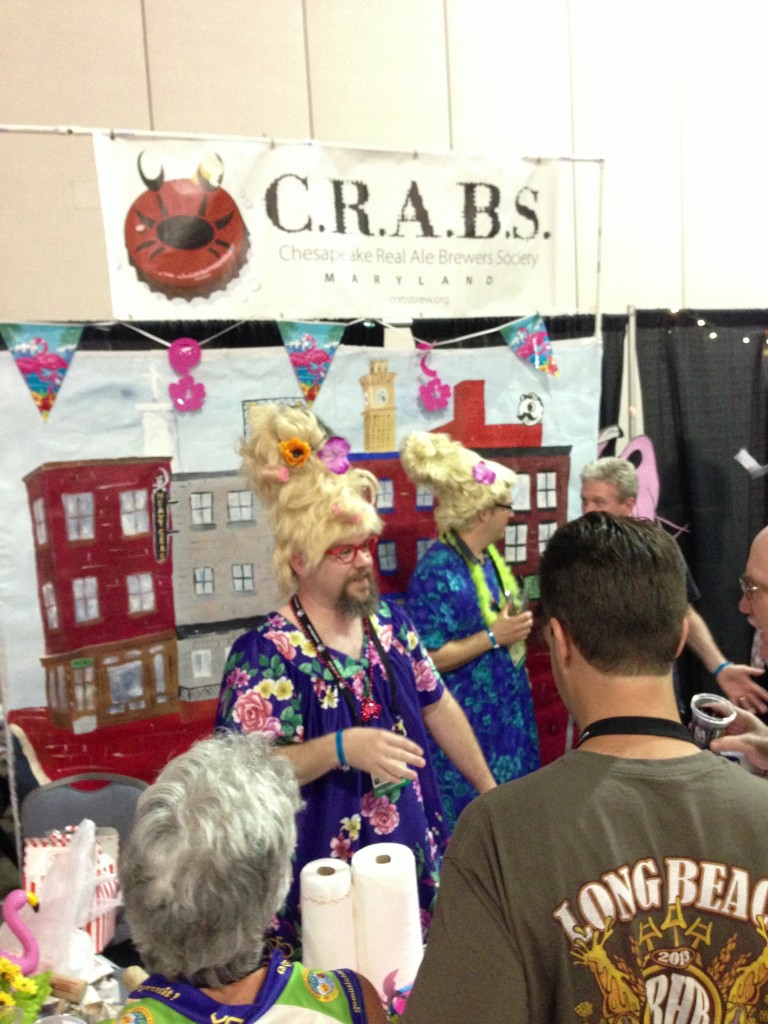 The wives of C.R.A.B.S. club members serving up some great beer. 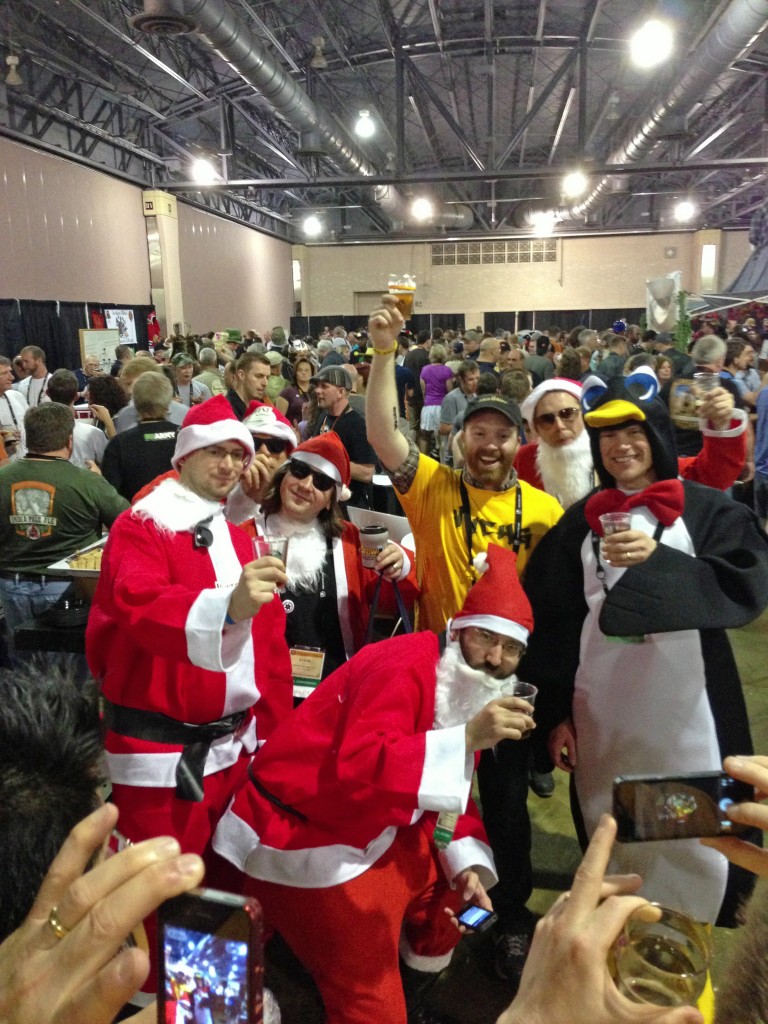 5 Santas, a Penguin, and an Excited NYCHG Club Member 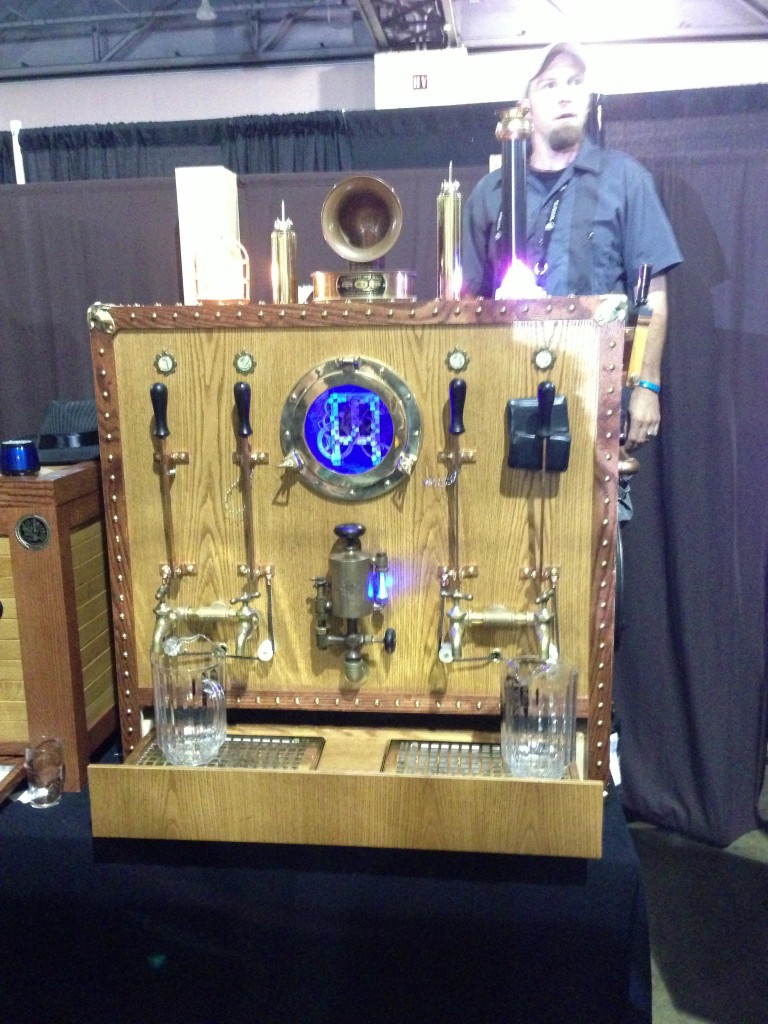 No homebrew competition awards ceremony has the energy present at NHC. It was a ton of fun watching the winners of the National Homebrew Competition collect their hardware. I didn’t enter this year, but knowing first-hand how much fun going up on stage to collect your medal is, fueled my excitement for those I was watching. Charlie Papazian was noticeably missing from the ceremony; hopefully he’ll be back next year.

The banquet food kinda sucked, and furthered my perplexity as to why people give so much praise for Sean Paxton’s (The Homebrewed Chef) meals. I’ve had three now, and all have been mediocre. I don’t expect much from banquet meals such as this, but it was pretty bad. 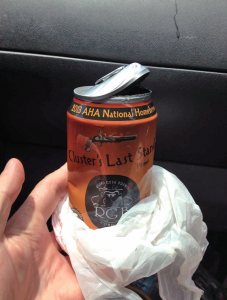 He never had a chance…

Boom goes the can! Seriously. Numerous cans of Round Guys Brewing’s – Cluster’s Last Stand commemorative beer literally exploded. Some faired a bit better only becoming rock hard and over-carbonated. One can I saw had its concave bottom popped out like a pregnant woman’s belly button — that’s a lot of pressure. I can’t help but chuckle at the irony that the  commemorative beer given out by the AHA was infected and produced can bombs. Over carbonation aside, the flavor was a bit butyric and phenolic (plastic) affirming the suspicion of infection. The other beer given out, a rye saison by Sly Fox, was better received and pretty tasty.

Next year the NHC circus travels to Grand Rapid, MI… also known as the hometown of Founders Brewing company, and apparently a lot of great homebrewers. Yes, Michigan is in the middle part of the country, but don’t hold it against them; they make outstanding beers. I for one am completely stoked to travel their next year and do it all over again!