This is not a Newcastle Brown clone recipe.

Not that there is a problem with Newcastle per-say. It is a fine beer (especially on draft) 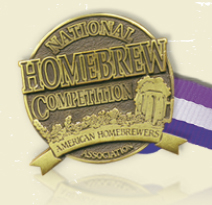 but simply not what I was looking to get out of this beer. I wanted to design something that focused more on the nutty and toasty characteristics of the style and minimized some of the sweeter full-flavors you can get with too much crystal malt. That being said, I also wanted to provide a hint of one of my favorite crystal malts – Crisp C77 which I think has a wonderful toffee and raisin characteristic. I also wanted to test some of Gordon Strong’s theories about using large portions of Vienna malt and no-sparge techniques in British beers. I think it worked. Please note that an erroneous copy of this recipe featuring brown malt appeared in the September / October 2012 issue of Zymurgy. This is the correct recipe that won gold in the second round of the 2012 National Homebrew Competition.

The beer brewed from this recipe has won awards as a BJCP Category 11c. Northern English Brown: