Excited things are happening at Peekskill Brewery. An expansion that relocates the brewery and pub to a new building just a few short blocks away is nearing completion. This expands both the brewery capacity, as well as as creating an even better place to enjoy Peekskill’s tasty beer and food. Several weeks ago, Peekskill’s Brewmaster Jeff O’Neil led a tour of local homebrewers through the under construction brewery and answered a ton of questions. Special thanks to Jeff for his hospitality and insight into the brewery’s plans!

Peekskill is currently renovating an old concrete and stone building (I’d guess about 100 years old) that will contain 4 floors (plus a roof deck and cellar) of beer goodness. The main brewhouse and fermenters will share the first floor with a generous bar and dining spaces. Grain is dropped into the first floor mashtun via a wet-mill located (and on display) on the second floor, which also features an additional bar and dining spaces that look down into the first floor through a opening in the floor. The third floor contains one of the brewery’s most unique features, a stainless steel coolship, as well as other additional, flexible space. The fourth floor is planned for a future banquet and catering space and the roof features a beer garden, which overlooks the Hudson River.

The Brewery (and Coolship!) 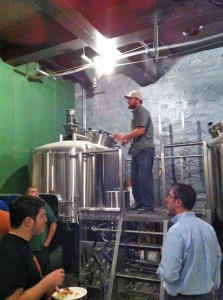 Upon entering the brewery you are greeted with what appears to be a fairly conventional set-up for a brewery of this size. Peekskill has installed a new, two-vessel, over-sized 15 barrel brewhouse which will be double-batched into jacketed 30 barrel unitank fermentation vessels. There is a walk-in cooler behind the bar which contains serving tanks for draft beer. The brewery is designed for a maximum annual capacity of about 3,000 barrels, of which about half will find its way into the local market (including NYC). What you can’t see from the first floor is the brewery’s most unique feature. A large stainless steel coolship lives two floors above the brewhouse on the third floor. A coolship is essentially a long shallow stainless steel pan that is used to cool the wort after the boil. Before the advent of modern heat exchangers, brewers would transfer their boiled wort into a coolship vessel in order to maximize the surface area of wort open to the air and expedite cooling. 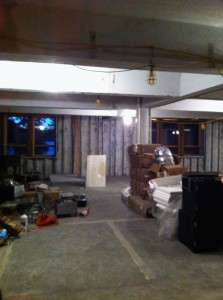 Very few modern breweries have these vessels, and those that do are using them almost exclusively for the production of spontaneously fermented beers. I asked Jeff how he envisioned Peekskill’s use of the coolship:

Primarily, it should really help us to run clear worts to fermentation.  When we cast out a kettle full, the wort will only be 10″ deep.  The trub dam will catch a lot of hot break and hop material and we’ll also be able to do late-hopping at a lower temperature than is possible in a traditional whirlpool vessel. This should help us to express a different character from late-hopping than we could otherwise.

Almost the entire lineup of beers will find their way through the coolship. Additionally, I asked Jeff about Peekskill’s plans to actually start fermentation in the coolship:

We will try all sorts of fermentations in the ship.  Most beers will just be up there for 30 minutes or so after the boil, but we will do many others where we begin primary fermentations in the coolship, and then drop them into cellar tanks for maturation.  We’ll do this with with an eye toward those styles, which would have traditionally been made in open tanks.  Some yeasts perform very differently under these conditions than they would in a “unitank.”  I’ll certainly try some truly spontaneous stuff, but time will tell how that pans out.

In addition to the new brewery, Peekskill has a new 4-head bottle filler designed for corked and caged bottles. Currently, the plan is to sell all bottled product via the pub as brewery-only releases.

Below grade and out of sight, the building features an expansive cellar. Here, Jeff expects to have space for 60 or more wine barrels to be used for wild beers. The cellar offers the perfect space for wild beers since it is physically separated from the main brewery, alleviating fears of cross-contamination. Additionally, Peekskill has additional room on the third floor for clean barrel-aged beers.

I am slightly embarrassed to admit that prior to my trip up to Peekskill, I had never sampled any of their offerings. After spending an hour or so in their tap room, I can honestly say that they are making some of the best beers from New York that I’ve sampled since moving here. I was especially impressed with their hoppy beers; I tried both their Double Standard (IIPA) and Eastern Standard (IPA). I asked Jeff to explain a little bit about their hopping program for these beers and whether he was doing a large whirlpool charge, running it through a hopback, multiple dryhops, etc.

We do all of those things that you mention and more, and are always trying to squeeze even more hop character out of every brew.  In my experience, a truly HOPPY beer has many layers. We take a lot of care through the entire process to hit very specific time, temperature, and pressure parameters in order to get that expression.

Peekskill is working to get their new doors open as soon as possible; hopefully within the next couple months. Peekskill is only about an hour up the Hudson Line from Grand Central Station, making it a great day trip destination from NYC. The brewery itself is a very short walk from the Peekskill train station. I highly recommend heading up there to sample their lineup of great beers. Once they start doing brewery-only bottled releases, you’ll have even more reason to visit. Stay tuned for their grand opening dates.