Goose Island Bourbon County Barley Wine on the left, homebrew variations in the middle and right.

Late in September 2013, I took a shot at brewing a clone of Goose Island’s King Henry barrel aged barley wine. The beer was left to rest on oak cubes which had been soaked in different spirits (Weller 12 Bourbon and Christian Drouin Calvados). After about 3 months on oak, I packaged the beer in individual bottles and decided to taste them blindly against Goose Island Bourbon County Barleywine — the closest beer I could track down that would resemble King Henry.

Rather than do an extensive review of each beer, I’d like to focus on the elements that are clearly different. The recipe I used came directly from Goose Island’s brewsheet for King Henry, so I am relatively confident in the grist make-up and hopping. That being said, I definitely did not achieve a clone due to the various reasons outlined below. 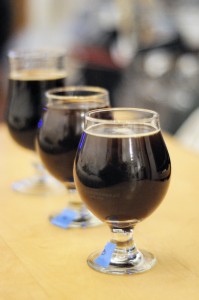 Barrel Character
The biggest thing separating my beers from the commercial example was the dramatic difference in barrel character. The Goose Island beer is extremely rich, with robust amounts of vanilla, toffee, and even a bit of sweetness coming from the barrel. Comparatively, the homebrew was almost thin, with a one-dimensional raw woody character that was dramatically different. I went through an exercise of adding slight amounts of bourbon back to the homebrewed beer, and while it helped, the character it imparted was more spirit-like in its booziness and lacked the depth and roundness of barrel notes the commercial beer contains. I’ve always been aware of the dramatic differences between simulated barrel aging, and actual barrel aging. Having these two beers side-by-side made this difference extremely obvious.

Yeast
The only real omission from the brew sheets I formulated my recipe off had to do with yeast selection. I ended up using Wyeast 1098 British Ale which left my beer with a distinct ester character, not found in Goose Island’s beer. My beer had much more British character than the Goose Island product. For the next iteration of this I brew, I will definitely be revisiting my yeast choice.

Color
The commercial example I am comparing my homebrew against is considerably darker in color. Previously I had discounted the statement I’ve heard in the past that the commercial beer picks up some color from the imperial stout which previously resided within the aging barrels. It’s tough for me to explain the color difference, so perhaps there is some truth to this.

While I wasn’t able to clone the beer, I still ended up with a really nice brew. It is somewhat one-dimensional in its oak character which I hope will evolve a bit with some age. The biggest take-away for me is that there truly is no substitute for genuine barrel aging. For my next iteration, I plan to obtain a 5-gallon whiskey barrel and see if I can get closer to the barrel character that Goose Island is able to achieve.

One thought on “Reviewing My King Henry Clone Attempt”