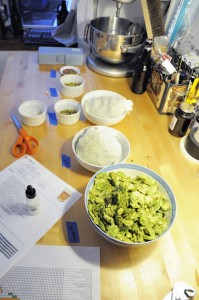 In the past, I’ve had good luck brewing my IPA. My standard recipe has won a number of awards and tastes great. That being said, my attention span is short and it is time to change things up. Between the fresh 2013 hops I had ordered in bulk (from Hops Direct) and capabilities built into my current brewery, the time was nigh to make some tweaks to Single Tap.

On the brew house side, I am now able to do a pump-driven whirlpool. This allows me to better simulate the extended whirlpool often done with the best commercial IPAs. Additionally, I now have a hop back that allows for one last infusion of hops directly before going into my plate chiller to cool. Finding Amarillo hops during the 2013 brewing year was nearly impossible. I’ve overcompensated this year by purchasing massive amounts of the 2013 Amarillo crop, which this recipe has been built around. I’ve also included a small charge of Sterling hops — a tip I picked up from Mitch Steele of Stone Brewing during last year’s National Homebrewers Conference. (The idea is that the Sterling will add a bit of complexity and nuance to what is otherwise a citrus heavy hop bill.)

8 thoughts on “A New Take on Single Tap IPA”